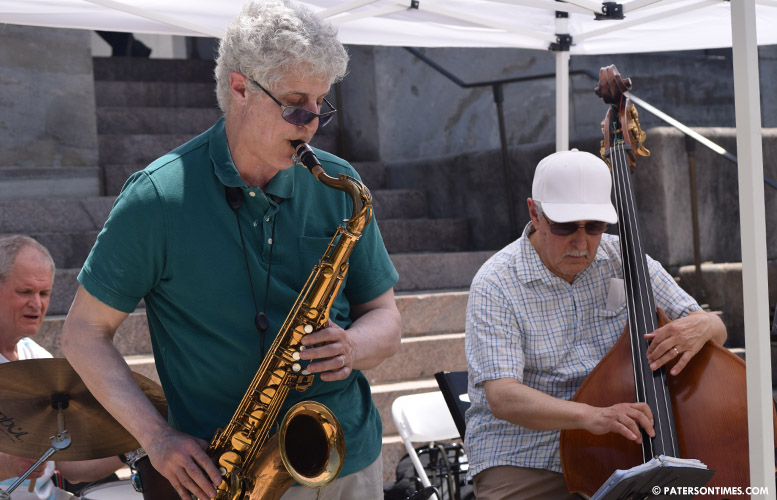 The music of Duke Ellington greeted visitors to the Passaic County Courthouse Plaza in Paterson as a series of summer jazz concerts at the renovated public space kicked off on Tuesday afternoon.

“That was a breath of fresh air to be coming out of court and walk right into something like this,” said city resident Chenna Johnson. “It lifts your spirits up.” She watched in awe as a group of four women performed traditional western African dances – Afunga and Manji — in front of the steps of the Passaic County Courthouse.

“That was beautiful,” said Johnson when the group from the L-De Dance School lead by dance instructor Leah Goodwill finished their performance. Johnson was so taken by the performers she live streamed the performance using her phone. She worried the group of ladies, who danced in barefoot, would suffer burns from the overheated ground due to the hundred-degree temperature.

“The floor is cooler. We thought it was going to be hot on the floor,” said Goodwill.

“It’s different,” added D’Angello Dangerfield, another resident, surveying the plaza. He came to the plaza for the jazz concert. He was amazed to see the area transformed into a plaza with well-kept landscaping and many benches. “It wasn’t like this before,” he said. The new plaza opened in late 2015. Prior to the $721,000 renovation project, the area was a dingy part of downtown Paterson.

“It didn’t look like this,” said Johnson. Mike Luipersbeck of the All-Star Trio, which put on Tuesday’s jazz concert, has visited the historic Passaic County Courthouse many times while working as a detective in Clifton. He was on first-name basis with William Bates, the former judge, whose name is attached to the plaza.

Luipersbeck, 71, welcomed the change to the area. He is the drummer in the trio, he said. His group had an extra member today. Petter Greco serves as the pianist; Ron Naspo, as the bassist; and Michael Gabrielle, as the saxophone player. His group has performed classic jazz and rock music from the 1960s throughout the tri-state area.

Luipersbeck’s group, a quartet for the day, performed Duke Ellington’s Satin Doll and Dave Pike’s Bossa Nova Carnival. His group is among several that will be performing at the plaza from this month to September.

“Every Tuesday we have a different performance,” added Kelly Ruffel, director of the Passaic County Department of Cultural and Historic Affairs. “Music draws everyone.”

The music drew many onlookers and those coming in and out of the multiple Passaic County government buildings in the area. There wasn’t just music, there was also vendors serving food and cold refreshments.

Cheryl Savittieri of CAS Catering had empanadas for sale. She wasn’t sure how many people would venture outside on the plaza due to the heat. “We’re not going to be insulted if they don’t eat a lot,” she said.

There was also City Green which setup a farm stand selling fresh lettuce, strawberries, and leaf cabbages. Lisa Martin and Tina Guvta were manning the farm stand. “We already had quite a few customers,” said Martin.

Some of the leafy vegetables were withering due to the heat requiring water to be sprayed over them.