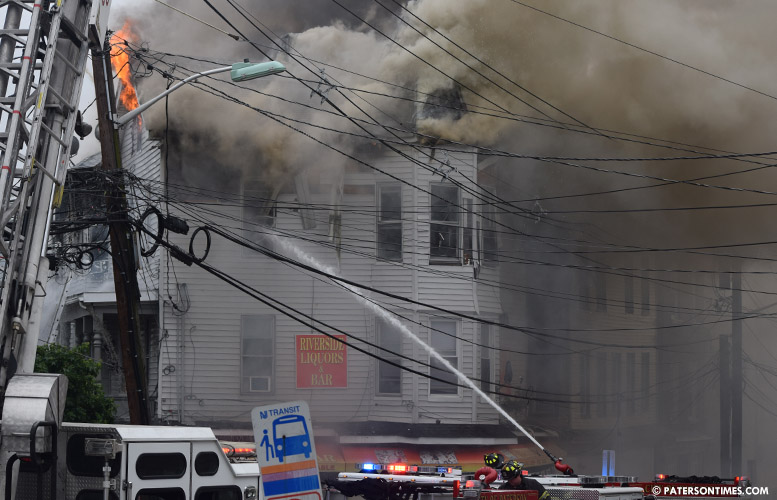 Three buildings were damaged in a massive four-alarm fire on Lyon and River Streets on Friday morning, said deputy fire chief Frank Calamita. Seven families were displaced from their homes following the fire, according to the American Red Cross.

Calamita said the fire damaged the structures at 68 Lyon Street, 398 and 400 River Street. Fire came in at 8:34 a.m. Upon, arrival firefighters found flames shooting through the roof of the building in the corner of Lyon and River Streets.

“We were there within three minutes. There was heavy fire and smoke throughout the structures,” said Calamita. “It was a very large fire.” Multiple aerial ladders were spraying the flames as the block filled with black smoke as bystanders watched the spectacular fire from their homes and the sidewalks. Firefighters went inside to conduct an aggressive interior attack, but the flames forced them out.

“After about half-hour the fire just overwhelmed us,” he said. Firefighters had to get out of the structures and go on the defensive, he said. But, soon thereafter, the firefighters went on the offensive and put out the flames.

Fire was contained at 11 a.m., said the deputy chief. There were no injuries reported, he said.

“The guys did a really good job. We could have lost five or six houses,” said Calamita. The biggest structure destroyed by the flames was a large liquor store with apartments on top. Riverside Liquors and Bar was housed on the bottom floor of the multi-story structure.

Of the three structures two were damaged by fire and one by water. The cause of the fire remains under investigation, said the deputy chief.

Some had to respond to jobs within the city as calls continued to come in for service in other parts of the city.

PSEG had to cut the grid for the area, said the deputy chief. He said the power company is in the process of turning electricity back on for the area.

As of late Friday afternoon, 67 PSEG customers were without power. The American Red Cross is assisting the seven families or 19 people displaced from their homes as a result of the fire.