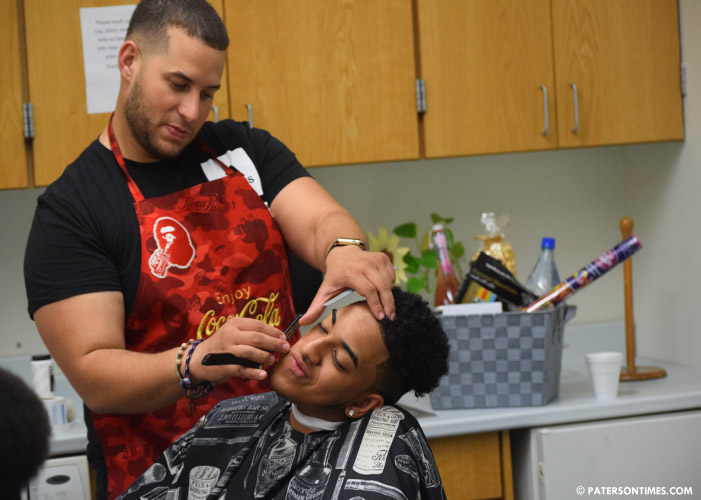 After scraping together $150 for an outfit for his eighth-grade prom, Angel Morel had little money left for a haircut. But he was in luck. The New Roberto Clemente Elementary School had connected with a Passaic City barber willing to provide free haircuts to prom-bound eighth graders.

“I always wished somebody did this for me because I didn’t have any money for a haircut,” said David Hung, owner of Dynasty Barbershop in Passaic City, on Tuesday afternoon, recalling the time when he was a youngster preparing for his eighth-grade prom.

Hung was able to relate to the boys growing up in the rough areas around Market Street and Park Avenue because he says he grew up in the “worst neighborhood” in his hometown. The boys sat around him, comfortably chatting in Spanish, while he trimmed hair and talked.

“I’m also giving them advice. Advice they probably don’t hear anywhere else,” said Hung (pictured). He told the boys to take caution when mimicking or viewing those on the corners that they pass-by each day going to and from school as role models.

Hung told them appearance isn’t everything. It may seem like the corner dealers have money based on their flashy clothing and shoes, but under the surface many have been to prison and risk their lives by being in the drug trade.

“I’m telling them there’s other ways to make money,” said Hung. The boys listened to him often halting their conversations whenever Hung began speaking. He said he saw this not only as a way to give back to Paterson, where he lived for six years, but also to make an impact on the lives of young people.

His haircuts were already making an impact. “Tomorrow is going to be a special day,” said Morel as he eagerly waited for his turn at the chair.

Morel will use the $25 he saved from receiving a free haircut towards his suit.

Geronimo Lopez was on the fence about going to prom. He decided to go at the urging of his friends at the very last minute. “My friends said it will be fun,” he said. His friends told him about the free haircuts to coax him to go.

“It looks great,” said one boy, whose head was cleaned up by Hung. He ran to the bathroom to take a good look. “He’s the best barber I’ve had,” said the eighth grader. He has been getting his hair cut at a barber since the third grade, he said. He was pressed for cash and planned to skip a haircut to pay for $100 shoes.

The prom haircut also saves the students from spending money for graduation grooming, said Hernandez. “You don’t have to worry about where I’m going to find the money for a haircut. We’re providing it for you. This can add up,” she said.

The full service community schools often provide wrap around services like after school programs,  free eye exams, dental care, and other services for their students.

The students have their prom today at the Brownstone.