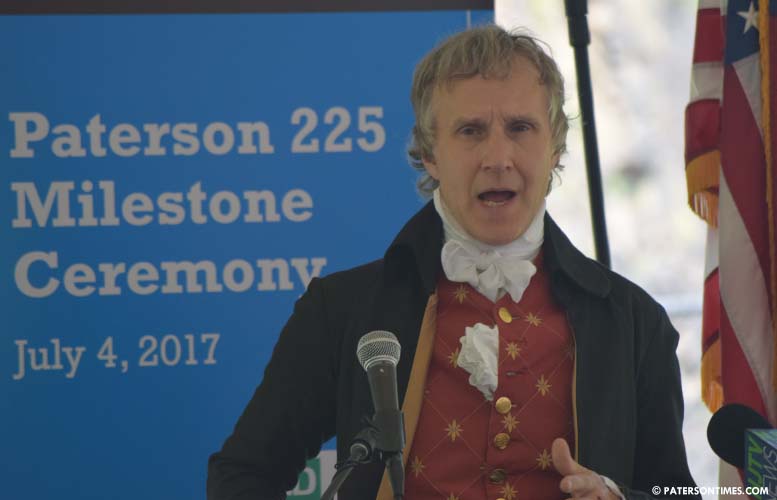 Hamilton — portrayed by well-known historic interpreter Ian Rose — was at hand to mark the auspicious occasion.

“I became mesmerized looking at the cascading waters,” said Hamilton (pictured) speaking of the July 10, 1778 picnic. “I was taken with its great potential.” Hamilton, James McHenry, George Washington, and Marquis de Lafayette picnicked under an Oak tree at the Great Falls and ate cold ham, tongue and biscuit. He envisaged the powerful water falls powering mills up and down the Passaic River.

When the war ended and he became the secretary of the treasury, Hamilton proposed the Society for Establishing Useful Manufactures (SUM) which founded Paterson as a manufacturing city to reduce American dependence on British industry.

Paterson became the birth place of the American Industrial Revolution. Its mills produced textiles, railroad locomotives, rope, and firearms. It also became a hub for innovation producing the Colt revolver that allowed for the conquest of the American West, the engine that powered the Spirit of St. Louis, and the modern submarine.

Paterson played an outsize role in American history. When president Gerald Ford visited the city in 1976 to designate the Great Falls Historic District he recognized the city’s contribution. “Please thank the people of Paterson for what they have done in history,” former mayor Lawrence “Pat” Kramer recalled the president telling him during the visit.

“America received an incredible gift from our city,” Kramer told a small group that gathered to mark the 225th anniversary of the city’s founding at the lower section of Overlook Park.

“Alexander Hamilton wanted to ensure that Paterson became the first planned industrial city so our nation could go forward and create our own capacity to become a manufacturing and industrial giant,” said Robert Guarasci, chairman of the Paterson 225 Planning Committee.

Hamilton’s vision came to pass. The United States became the most powerful country in the world by virtue of its economic prowess following World War II. The manufacturing society that was established by Hamilton was disbanded in 1945.

The mills have closed and the city has been stuck in an economic quagmire for the past decades. Today, the city is known more for its poverty and drug trade than for innovation and industry.

“We have a city that’s struggling like all urban cities in America, but Paterson has met her crises again and again,” said an optimistic Kramer. “Get up, Paterson! Dust off your dress.”

Paterson prevailed over great fires and floods, said the former mayor. The “old gray mayor,” as Kramer calls himself, wasn’t the only one optimistic about the city’s future. Dozens of young people who attended the marker ceremony see a bright future ahead for the city.

“I think, the city will have a good future,” said Michael Perez, a volunteer of the Great Falls Youth Corps, who will start as a freshman at International High School in the fall.

Perez is optimistic Paterson will once again become a great city within his lifetime.

“I do believe that Paterson itself can become great again,” added Itzel Sosa, another volunteer of the Great Falls Youth Corps, who will start as a freshman at the Passaic County Technical Institute in the fall. “We do have a good future.”

Rose, the Hamilton re-enactor, also believes it. He played Hamilton on PBS special First Freedom. On this Fourth of July, Hamilton also provided the young and old a history lesson on the American Revolutionary War battles that took place in New Jersey. His performance filled with humorous quips received great applause from the crowd.

“I don’t suppose any of you know this, but before the war I had applied to the College of New Jersey at Princeton and I had been denied,” he said. Hamilton, captain of the artillery and later aide-de-camp to Washington, told the audience he got into the now Princeton University with a cannon. “If you were to apply to university, I encourage you to apply using pen and paper, canon only worked for myself,” he told the young people.

The ceremony at the Great Falls was the culmination of a series of events celebrating the 225th birthday of the Silk City. The attendees cut a custom-made cake that featured the Great Falls and wished the city a happy birthday.