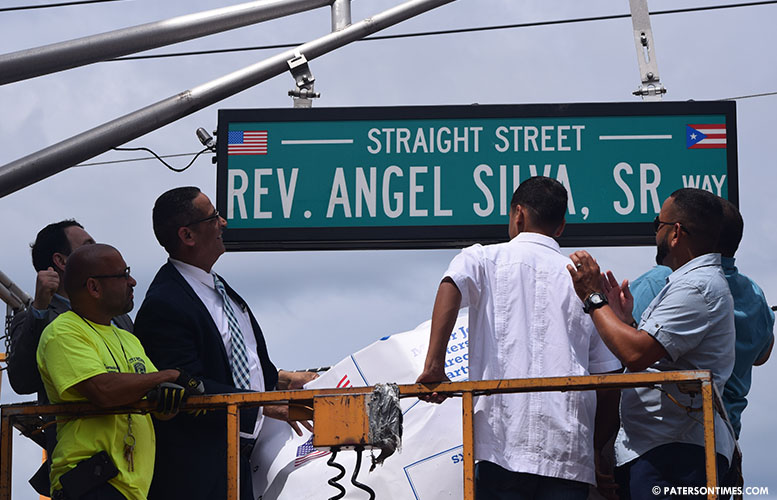 For more than three decades pastor Angel Silva, Sr. not only provided spiritual sustenance to the residents of the Sandy Hill section, but ensured the neighborhood’s poor had enough bread. He also made sure neighborhood children had recreational opportunities, recalled community leaders and his family at a street naming re-dedication ceremony at the corner of Straight and Essex Streets on Saturday morning.

“He had a big food pantry here. People would line up,” said Angel Silva, Jr., the pastor’s son. “He used to have events for the kids for the summer time. He’d have water rides and barbecue. He used to take the youth to Canada.”

The pastor also took youngsters to the Land of Make Believe, said the son. In September, the pastor and his wife Olga Silva would equip children with school supplies, he said.

His father no longer lives in the Silk City. The pastor was forced to relocate to Florida due to illness. He needed a liver transplant and remained in Florida after the operation. At 73 years of age, the pastor continues to serve the community outside of Tampa, Florida, said the son.

“On Mondays, he used to load up the bus and take all the kids to the park,” recalled David Silva, the pastor’s youngest son, a Paterson police officer. The pastor’s contributions to the neighborhood did not go unnoticed. In 2012, the city council approved a measure to designate a portion of Straight Street from Essex to Market Streets to Rev. Angel Silva, Sr. Way.

When the street was designated four years ago, the ceremony was well attended by local leaders. Councilman Luis Velez, who represents the 5th Ward where the street is located, expressed disappointment at mayor Jose “Joey” Torres’ absence from the re-dedication event. The small group of family and community leaders expected to unveil the new street signs at 10 a.m., but waited until 10:45 a.m. for the mayor.

Torres was a no-show. He did not respond to a call for comment on Saturday afternoon.

Silva served as the pastor of the Iglesia Cristiana Pentecostal Assemblies of God for 32 years at the time. He founded the church which sits on the stretch of road named after him on Straight Street.

The pastor was also the founder and first president of the Paterson Hispanic Pastors Workshop, according to his sons. He emigrated from Puerto Rico to Paterson. His three sons continue to call Paterson home; his daughter lives in Florida.

The city replaced the various street signs as part of the re-dedication. “The sign was damaged,” said Velez speaking of the sign on Essex and Straight Streets.

“We’re happy for the light. Before it was a small sign,” said David Silva speaking of the sign that will light up at night. He patrols the Sandy Hill area and will be sure to look up at the sign that honors his father.