A year after the city created hotspot business curfew areas forcing troublesome chicken joints and liquor establishments to close at midnight, the number of people wounded in shootings in those zones dropped by 79-percent. 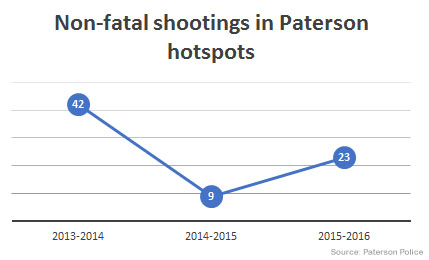 It still kept non-fatal shootings down by almost 50-percent from prior to the passage of the ordinance. Councilman Andre Sayegh, the main champion of the hotspot ordinance, hailed the law as effective in reducing crime and called for its expansion.

“I’m encouraged the ordinance is effective. Crime is not always statistic. It’s a feeling. You can give people statistics every day, but if they don’t feel safe where they are it’s irrelevant,” said Sayegh.

Business owners and customers feel safe in a stretch of Main Street that was designated as a business curfew zone, he said. “When you speak to the barbers, when you speak to the restaurant owners they feel it. As a result, commerce has improved in the area,” said Sayegh.

Noise complaints from curfew areas dropped significantly, but ticked back up in the second year of the ordinance.

“It works for the city of Paterson,” said police captain Richard Reyes. The reductions in the high crime areas are not causing increases in other parts of the city, he said.

There was an overall citywide drop in non-fatal shootings, said Reyes. If there was displacement the number would have remained stable or increased.

“I carefully watched for displacement,” said Reyes. “The data shows that there is no displacement.”

Police officers who patrol the streets at night disagree with the captain. In a survey, 60-percent of officers said crime was moving from hotspot zones to safer areas. 94 police officers completed surveys. 90-percent of them agreed the ordinance was working to curb crime.

The survey also asked officers to identify other areas that can benefit from addition to the hotspot ordinance. Police officers identified Union Avenue between Redwood Avenue and Kearny Street and the corner of Main and Weiss Streets.

There was an ordinance before the council to designated a portion of Union Avenue as a hotspot zone; however, business owners opposed the measure.

“I don’t know why it was scuttled last time. We can lose lives if we fail to act immediately,” said Sayegh. He requested an ordinance be introduced adding stretches of Main Street and Union Avenue to the business curfew.