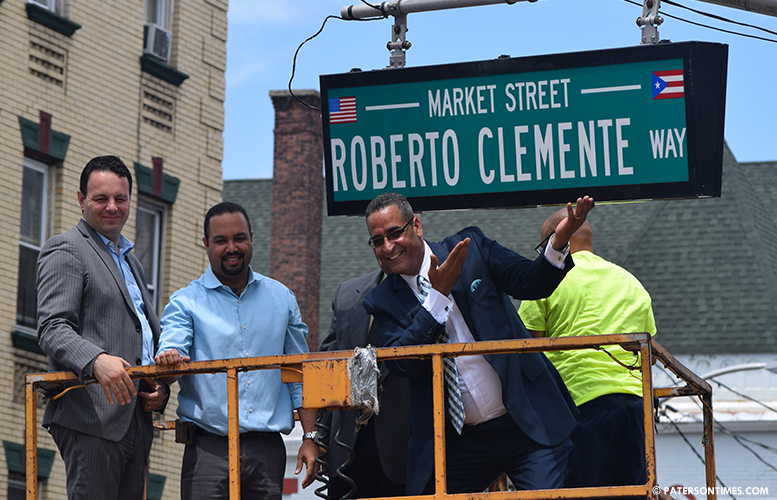 The city re-dedicated a portion of Market Street in tribute to baseball hall of famer Roberto Clemente earlier in the month.

Councilman Luis Velez unveiled a much larger sign honoring the Puerto Rican baseball player at the intersection of Market and Summer Streets on July, 8th, 2017.

“We waited 18 years for this. 18 years,” said Juan “Mitch” Santiago, president of the dormant Roberto Clemente Memorial Committee Inc. “A lot of people think he’s just a baseball player. He was a humanitarian; he was a marine. He lost his life delivering aid.”

Clemente died in a plane crash in 1972. He was on a cargo plane carrying relief supplies to earthquake victims in Nicaragua. Puerto Ricans celebrate him just as Italians celebrate Christopher Columbus.

Velez said before the new sign was unveiled, an unnoticeable green banner hung under the Market Street sign that read “Roberto Clemente Way.” That sign has been replaced with a larger sign. The initial designation was created in 1999 when the Sandy Hill Park was renamed to Roberto Clemente Park and a statue of the baseball legend was unveiled at the park.

Santiago said the statue cost $20,000 and received support from a wide variety of community leaders including then-mayor Martin Barnes and Rep. Bill Pascrell.

“He was a pioneer like Jackie Robinson,” added councilman Andre Sayegh. Indeed, Clemente paved the way for Latino players in major league baseball.

The park that is named after Clemente is in poor shape. Santiago, who intends to run for an at-large city council seat in May 2018, wants to revive his organization to secure grant funding to help renovate the Sandy Hill neighborhood park.

“We want to get some open space funding to make some improvements to the park,” said Velez, who has made improving open space in the 5th Ward a priority.

Santiago, who is Puerto Rican, was inspired by Clemente’s story when his family members pushed him into reading a biography of the humanitarian. This led to him and other like-minded locals to form the organization that helped put up the street sign, rename the park, and build a statue.

The city has two schools named after Clemente. Santiago is a former three-term school board member. He works as a senior sanitation inspector at the Paterson Department of Public Works (DPW).

Clemente would have turned 83 years old in August.