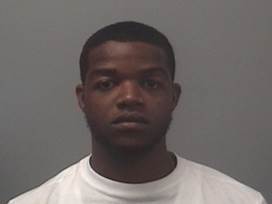 A city man allegedly carrying marijuana inside a McDonald’s bag was arrested in a traffic stop on Sunday, according to Passaic County Sheriff Richard Berdnik.

Patrick G. Brown, 24, of Paterson, was pulled over inside a tinted BMW on 10th Avenue and East 28th Street, authorities said.

Brown allegedly had a silver grinder on the center console, 50 glassine envelopes of heroin, a McDonald’s bag with a zip lock baggie containing marijuana.

Authorities said Brown had $3,161 cash in his right front pocket.

Passaic County Sheriff’s Officer Carmelina Rojas conducted the motor vehicle stop that resulted in the arrest and drug seizure. She smelled marijuana when she approached the vehicle that started the drug investigation, authorities said.

Brown was given a ticket for having tinted windows, authorities said. He was additionally charged with five drug offenses including possession and distribution.