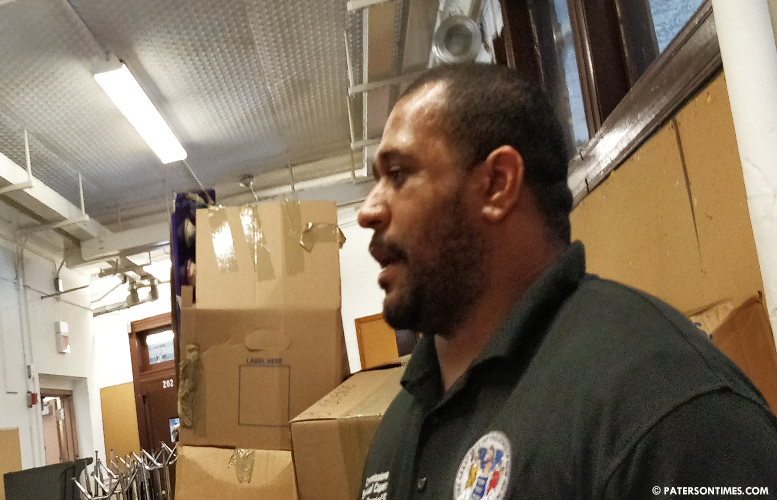 School board member Emanuel Capers led a group of community leaders on a tour of old School 11 on Friday morning to demonstrate the Market Street building is no place for the Great Falls Academy, an alternative high school for troubled teenagers.

Capers pointed to a big puddle of water on the floor of the cafeteria’s food serving area. There’s also open and rusted pipes in the cafeteria that Capers (pictured) described as a “dungeon.” He pointed to mold in the ceiling and uneven, torn titles on the second-floor bathroom. There’s also problem with heating and cooling in the building, he said.

“This is how it is,” said Capers brushing off sweat from his forehead. “This is not fit for a high school.”

School 11 is almost 100 years old. The building is in such bad shape that the district’s five-year facilities plan recommended School 11 be razed to make way for a new facility. It has a “high condition needs relative to other schools” in the district, the 2015 report said.

The district plans to relocate the Great Falls Academy with its approximately 50 students from a leased building on Wagaraw Boulevard in Prospect Park to School 11 on the corner of Market and Summer Streets as part of a reshuffling effort.

The Prospect Park building would house the Young Men’s Academy, an all-boys school, which was run from an old church on Smith Street. It would then sell the old church building. The Newcomers Elementary School that was housed at School 11 would be split up between School 15 on Oak Street and the New Roberto Clemente School on Market Street.

Earlier in the year, the district contemplated selling the School 11 building in the 5th Ward for $2 million.

“I think this is going to bring more stress to the 5th Ward,” said Luis Velez, 5th Ward councilman, who was included in the tour. He said there’s great deal of traffic on Market Street due to Eastside High School. He found out about the move on Thursday.

Velez said there’s already a lot of problems like fights coming out of Eastside High School that spills into the neighborhood. There’s also the danger of gang violence that could erupt from having students from the Great Falls Academy in the Market Street area, said community leader Alonzo “Al” Moody.

“These are kids that have been involved heavily in gang activities and they are involved in the street,” said Moody, who is described as the founder of the Great Falls Academy. “It’s not safe at all.” Some of the students served by the alternative high school attend to avoid imprisonment and others do so as a last choice before expulsion.

The area around School 11 is known for drugs and gangs. Moody points out the area is home to street gangs like MS-13, Bloods, Crips, Dominicans Don’t Play (DDP), and several Puerto Rican gangs.

“That’s a big concern,” said Capers. “You got ‘Up the hill’ and ‘Down the hill’ — that gang rivalry. I don’t think the board vetted this through.”

Moody said students will be put in danger. He said some students will have to walk through rival gang territories to get to the building. “I don’t think they have thought it out,” he said.

“School 11 has and will continue to be used as one of our district’s school facilities,” said Terry Corallo, spokeswoman for the Paterson Public Schools. She said the district is working to address staffing and facility concerns at the building. Part of it includes “the use of age-appropriate furniture as well as addressing other concerns such as restrooms to ensure the school is ready to open in September,” said Corallo on Friday afternoon.

Capers is suggesting the district follow the recommendation of its five-year facilities plan and take the building offline.

“Would you send your child to this school?” asked Capers after finishing his tour with half-dozen community leaders that included ex-mayor Jeffery Jones, mayoral candidate Glenn Brown. “You cannot get a quality education in this school.”