Rain gardens being installed at Paterson’s School 4 and School 28 to capture 500,000 gallons of water | Paterson Times 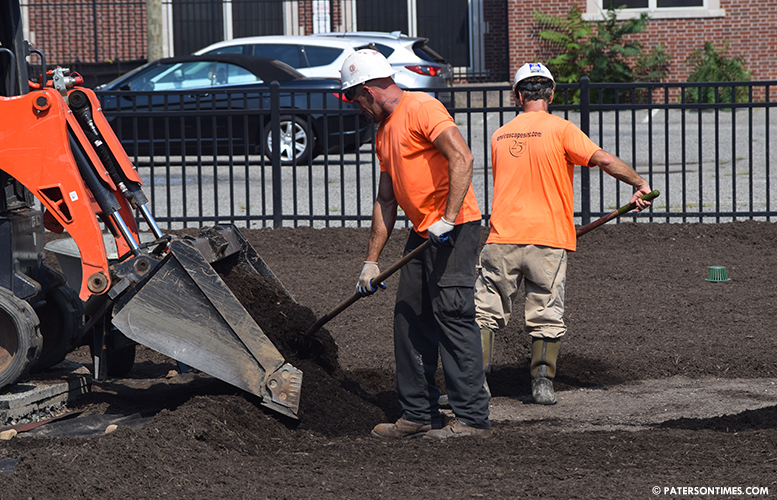 The two rain gardens being installed at School 4 and School 28 will prevent 500,000 gallons of water from entering the city’s combined sewer system. Both gardens will also create greenspace in the asphalt playgrounds of the two schools in the Riverview neighborhood.

Twelve tree pits were being installed at both gardens on Friday morning. John Snowden, project manager for Kendall Park-based Enviroscapes, said native New Jersey shade trees will be planted in the pits. His team was installing and spreading mulch at the two gardens.

Gabion baskets will be installed at both sites to prevent soil erosion, said Snowden. He said the garden at School 36 is 45 by 45 while the large L-shape School 28 garden is 76 by 30.

Both rain gardens cost $106,000. School 28 cost $80,000 and School 4 is $26,000. Both projects are being covered using a $500,000 green infrastructure grant secured by Paterson Storm Water Management Resource Training (Paterson SMART), a coalition of organizations with a mission to better manage storm water through green infrastructure.

The gardens won’t be finished without some work from students of both schools. Rosana Da Silva, program associate with the Rutgers Cooperative Extension Water Resources Program, which is a partner in the Paterson SMART coalition, said students from both schools will plant in the fall to take ownership of their rain gardens.

“This is going to be an outdoor living lab for the schools,” said Da Silva. Rodney Williams, director of energy and project control at the Paterson Public Schools, said there’s an environmental club at the Paterson Academy for the Gifted and Talented that can make good use of the rain garden at School 28.

There are also practical benefits for both schools. When there was a heavy rainfall last week much of the water that would usually form puddles in the School 28 playground ended up in the dugout area, said Williams.

Both rain gardens will do much more. The biggest benefit is the 500,000 gallons of water that will be captured by both gardens.

“We’re really looking to alleviate the pressure on the CSO and give an alternative. Right now, most of our infrastructure to manage storm water is gray — it is underground — so it’s out of sight, out of mind,” said Da Silva.

Da Silva said having green infrastructure, like the rain gardens, allow the public to think about the big issues like problematic combined sewer systems in old cities. “We need investment into our gray infrastructure and green infrastructure brings it back up to a visible place where you can have those conversations about managing storm water,” she said.

City officials estimate it will cost half-billion dollars to repair the old sewer system. To put this in context, Paterson’s annual municipal budget is about $150 million.

Paterson SMART is building a third rain garden at John F. Kennedy High School. This one will cost $34,000. All three are expected to be finished at the end of August. These gardens are three of 15 sites throughout the city identified for green infrastructure projects.

The coalition secured a $500,000 grant from the New Jersey Department of Environmental Protection (DEP) to undertake the green projects.