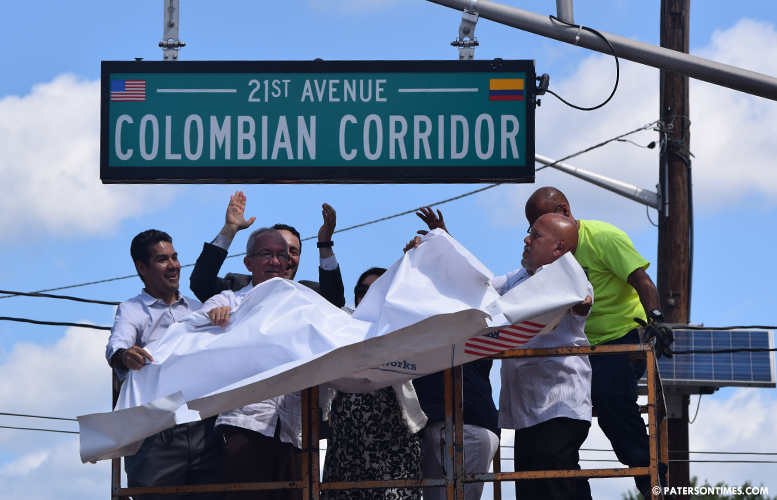 Dozens of people from the city’s Colombian community had their eyes fixed on the covered street sign above the intersection of 21st and Madison Avenues on Saturday morning. Mayor Jose “Joey” Torres pulled the covering off to unveil the new name for the intersection: “Colombian Corridor.”

The new name recognizes the city’s Colombian community. It is estimated 5,000 people of Colombian heritage live in the city. Most of them dwell in the vicinity of 21st Avenue in the People’s Park section of Paterson.

Many of them were overjoyed to have 21st Avenue between Madison Avenue and East 22nd Street – an area dotted on both sides by Colombian-owned restaurants, bakeries, coffee shops, and bars — named after their homeland.

“Man, this is great. To see our sign representing Colombia is a dream come true for all the Colombians living around this area. It represents unity and the hard work of all the Colombian people that have been living here for so many years,” said Manuel Caicedo, 27.

Caicedo has been living in Paterson for 10 years. He first arrived in the United States 15 years ago. He spent five years living in Clifton before moving to the Silk City. He feels at home in Paterson, he said.

Before the Colombians, the area was home to Irish and Dutch immigrants, according to Torres. Paterson is the only city in New Jersey to have avoided a big population drop following the expansion of the suburbs thanks to the constant flow of immigrants to the city founded by an immigrant from the Caribbean — Alexander Hamilton.

Colombians have been arriving in Paterson since the 1960s, according to city officials. Those who moved out of the city to settle elsewhere continue to visit the city to patronize the Colombian restaurants, said Osiris Barcenas of Hackensack.

Barcenas visits the Noches de Colombia Restaurant on 21st Avenue. She is an instructor at Ical Folklore Dance Group. 27 youngsters, between the ages of 6-15, from the group performed traditional Colombian dances at the street name designation ceremony.

“I’m proud. As a Colombian, it’s an honor to have our name on a street in American,” said Barcenas.

The street naming was talked about for two decades, said Javier Fernandez, president of Hijos Y Amigos De Colombia (Sons and Friends of Colombia). His group collected 1,000 signatures to secure the designation.

“It’s for the community. This will be a destination in Paterson,” said Fernandez (pictured, far left). The ceremony was attended by almost 100 people. His ceremony included the city’s entire Colombian community. In similar street naming for other ethnic communities, there have often been disunity and disorganization.

Fernandez, who is described as easygoing and affable, successfully avoided factionalism within the city’s Colombian community.

Councilman Andre Sayegh, who represents the 6th Ward where the area is located, has said this section of 21st Avenue will become the go-to place for the region’s Colombians.

“We’re happy they thought about the Colombian people,” said Nelson Rojas, 64, of Paterson.