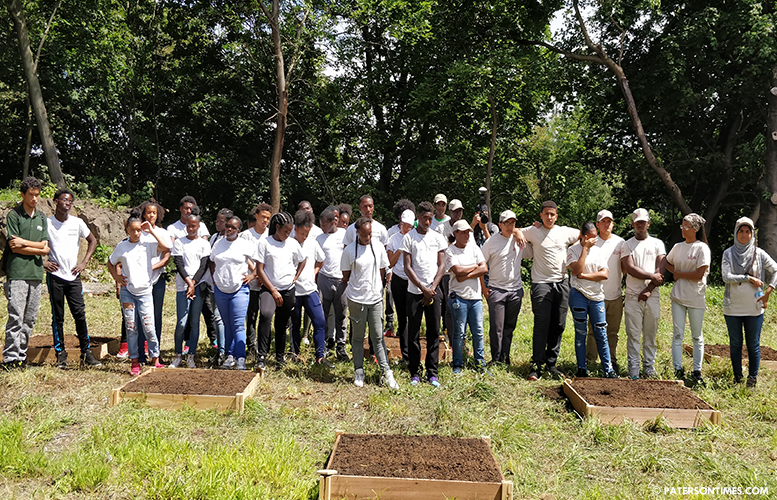 Almost three-dozen young people cleared tall weeds and prepared a sizeable piece of land in the rear side of the former American Legion Hall building on Wednesday for a community garden at the soon-to-be Paterson youth center on Front Street.

Among them was 15-year-old Aleisha Carmichael. “We cleaned up the trash. We pulled out the weeds. And then we prepared the area for plant boxes,” she said. She and the other young people, most of them local high school students, spruced up the back of the building as part of a summer employment program run by the New Jersey Community Development Corporation (NJCDC).

“Yesterday was really the rougher day, where we ended up cutting all of the grass over there,” said Guillermo Romani, 21, pointing to a cleared area at the very back that had weeds as tall as five feet.

Temperature soared to almost 100 degrees on Tuesday which made it difficult, said Carmichael, a 10th grader at International High School. But the young people persisted, cleaning up rocks, wood, and garbage, said Romani, an architecture student at the New Jersey Institute of Technology.

“There’s a really big difference between yesterday and today,” said Bob Guarasci, head of the New Jersey Community Development Corporation, after surveying the area. His two programs — the Great Falls Neighborhood Youth Corps and Junior YouthBuild — employed 60 students using $19,000 in grant funds from the Community Foundation of New Jersey and $75,000 from a federal grant issued by the City of Paterson.

Young people spent six weeks in the program. It taught them work ethics, money management, and good citizenship. Young people had to wake up early in the morning and report to work, said Guarasci. They also had to take orders from their bosses, he said.

“It has taught me to be more considerate. It also taught us responsibility — always be accountable. And always stay focused while working,” said Carmichael. “I learned that excuses are a monument to nothing.”

What also helped keep the young people focused was the paycheck. Every two weeks they received a paycheck for their hard work. “It’s like, ‘Oh man, my hard work,’” remarked Carmichael.

The program also keeps young people off the dangerous and often violent streets in the summer months. It also instills in the young people a sense of pride in their community. For example, Romani did not realize the vastness of the Silk City and the many different people who call it home.

“It was just an eye opener, this program,” said Romani. “Paterson is huge.” He said some residents and businesses offered refreshments to the young people when they were cleaning up the city.

“These programs are about building a better Paterson,” said Guarasci. He would like to see the summer youth employment program be expanded.

Guarasci tried to secure $100,000 in Community Development Block Grant (CDBG) program money from the city, but ended up receiving $75,000. He hopes to secure more private contributions to create more slots for young people.

The Junior YouthBuild program started two years ago while the Great Falls Neighborhood Corps has been around for three years, said Guarasci.

Guarasci held a brief ribbon cutting ceremony to celebrate a job well done at the community garden. Young people planted wildflowers after setting up planting boxes at the site. Annuals, perennials, and vegetables will be planted at the garden.

The youth center will open in two months.