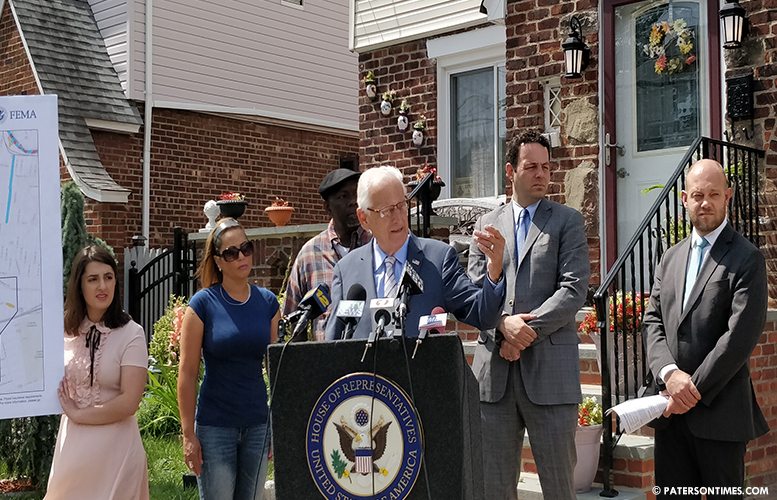 After decades of paying flood insurance on her home in a neighborhood that never floods, Mable Richardson received some relief on Monday afternoon. She and many of her neighbors, effective today, will no longer be mandated to purchase flood insurance.

Federal Emergency Management Agency (FEMA) has revised the city’s flood maps to downgrade 200 properties from being high to moderate flood risk. This makes keeping flood insurance optional paving the way for thousands of dollars in savings for homeowners.

“They were paying for something they did not need,” said Rep. Bill Pascrell. “People were selling their homes because they couldn’t afford flood insurance.” He was standing in front of the East 30th Street home of Heather Ramirez.

Ramirez has been paying $3,000 every year for flood insurance for the past 15 years. “This is a big relief. This means a lot,” she said. “It’s now a choice.” She has to decide whether to keep her flood insurance policy or get rid of it.

The federal government is not recommending homeowners suddenly drop their flood insurance policies. There’s still a 0.2-percent chance of their flooding.

“While we officially reduced the mapped risk here that does not necessarily indicate the flood risk is gone. We still encourage homeowners, property owners, and business owners in these areas to maintain their flood insurance policies,” said Andrew Martin of the Federal Emergency Management Agency.

Martin said the policies will cost less as a result of the risk downgrade. Since 1978, there have been 12 federal disaster declaration due to flooding along the Passaic River. There have been 1,214 flood insurance claims filed by property owners in Paterson totaling $36 million in damages, he said.

Some of the properties in question are miles away from the Passaic River. These properties have not experienced flooding in decades, said officials.

“This is a victory for fairness. Residents of the 6th Ward can breathe a sigh of relief,” said councilman Andre Sayegh of the 6th Ward. “We’re providing residents with some long overdue relief.”

Sayegh got involved after Richardson approached him about the issue. She thought it abnormal that her street was listed as a high flood risk zone when she saw a flood map. The councilman involved Pascrell.

Pascrell advocated for the changes that ultimately led to the finalization of the revised maps. There was frustration the maps were not being revised fast enough. The process started in January 2015.

“It seemed like relief was not on the way,” said Sayegh.

“I thought it wasn’t possible,” said Ramirez speaking of getting her home off of the high risk flood zone.

The revised maps include properties outside of the 6th Ward in places like Summer Street and East 18th Street.

“I’m satisfied,” said Richardson. She will receive a letter from the federal government that will have to be sent to her mortgage company to make flood insurance requirement optional.

Pascrell and Sayegh promised to provide the needed letters to the homeowners. Known for knocking on doors, Sayegh intends to get the word out to his constituents.

“Thank God for relief,” said homeowner Moses McKenzie looking up at the sky. “Thanks be to God, it’s finally here!”