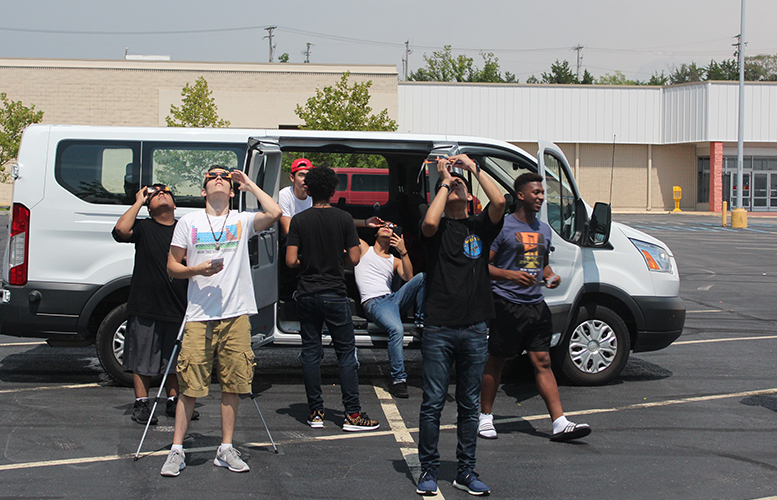 Jeffrey Sanchez traveled more than 1,200 miles to Kansas City to see the full solar eclipse. He and others from the Matter Observed Through Hombres (MOTH), a boys’ science enrichment program run by the Paterson Education Fund, researched what would occur in that brief moment when the moon totally occults the sun.

“It went from daylight to nighttime in an instant,” said Sanchez, 18, a student at the Passaic County Technical Institute, on Tuesday afternoon. “It was kind of scary at first.” Street lights came on and the temperature suddenly dropped. Birds, confused by the sudden darkness, displayed abnormal behavior.

The total eclipse observed by the students.

Sanchez, having conducted research prior to the trip, expected much of the strange things that occurred. He also learned certain plants shrivel up during the eclipse while others open up.

“Some of those plants open up during cold temperature to absorb carbon dioxide,” said Sanchez. He wasn’t able to observe this phenomenon, for he was among ten people, mostly local students, who watched the totality, something that hasn’t happened in continental United States since 1979, from a Jefferson City, Missouri parking lot.

“It was something rare. It doesn’t happen every day or every year,” said Brian Trivinos, 19, a student at Passaic County Community College. “You have to see it with your own eyes.”

“It was just fascinating. There’s a million and one adjective I can use to describe it,” said Quashon Stokes, a software engineer, who served as a chaperone. “It was overwhelming.”

The group in Missouri posing for a photograph.

The students also took in local history and the important role Kansas City played in the American Civil War. One piece of local history that fascinated the boys was how the mafia controlled Kansas City during Prohibition.

“I felt like a sponge,” said Bryan Diaz, 17, a student at School of Architecture and Construction Trades at John F. Kennedy High School.

Students visited a restaurant that had an underground tunnel that the mafia used to smuggle alcohol.

“Kansas City also has the most fountains outside of Rome,” interjected Jordan Blakney, a software tester, who served as a chaperone.

The group stayed at a hotel in Kansas City for two nights and three days. Their study trip was put in doubt when the Missouri NAACP issued a travel advisory. It cautioned minorities of “looming danger” of racist attacks in the state.

Mario Benitez, leader of the MOTH, had to assuage the concerns of worried parents. He spoke to a police chief in Missouri and a sheriff’s detective to ensure the safety of the group.

“I didn’t want to put the kids at risk,” said Benitez. He instituted a buddy system and promised parents that students would not be out at night.

“We can’t let fear stop us from experiencing a cosmic event,” said Benitez. One parent kept her son from going on the trip as a result of the advisory.

Kansas City was selected following careful research of weather, transportation, and other factors. “We could have gone to South Carolina, but he found out it was cloudy that day,” said Blakney speaking of Benitez. “We went to the place where we had a chance to see it clearly. When we went down there, we found out there was going to be clouds, so we found a city that had the least amount of clouds.”

The group went to Jefferson City, the state’s capital, to see the eclipse. “The Kansas City we thought was not the Kansas City we found,” said Blakney. The group was surprised and pleased at the hospitality and friendliness received from residents.

Blakney said a lot of locals were interested in what the group was doing. Benitez said the students served as experts in the parking lot when it came to the subject of solar eclipse.

“We were explaining to them the science,” said Benitez. “When we were there, we were ambassadors not only of Paterson, but of astronomy and science.”

The group was interviewed by a local radio program hosted on NPR at Park University. The group went to Missouri River Regional Library for the interview. The director of the library assisted them.

Benitez said the group was extremely excited about science in the trip. The purpose of the group is to encourage young men to study engineering and other hard sciences.

“Classroom work is not always as engaging as we would like. What we want to do is excite them about learning. It’s a different way of learning than reading it in a text book,” said Rosie Grant, executive director of the Paterson Education Fund.

Grant’s organization funded the study trip. It cost an estimated $7,000.