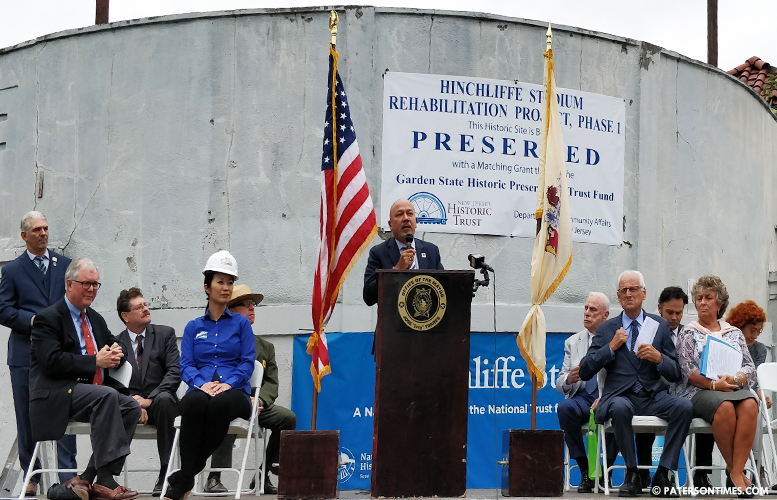 The long-awaited restoration of Hinchliffe Stadium moved a step closer on Tuesday morning with the ground breaking of the first major phase of construction at the historic ballfield in the corner of Maple and Liberty Streets.

The project includes the restoration of the front of the stadium on Liberty Street side including façade, ticket windows, terracotta tiles, entrance gates, and other decorative features. Four cast concrete Hinchliffe Stadium signs will also be restored as part of the work.

“This is a humdinger if I ever saw one,” said Rep. Bill Pascrell. “Sadly, the stadium sat in a state of disuse.” The city’s school district, which was given ownership of the stadium in 1964, could not afford the upkeep, which lead to closure in 1997.

“Hinchliffe Stadium is a remarkable survivor of neglect,” said Brian LoPinto, president of the friends of Hinchliffe Stadium. “Because of that neglect there is a high price for its rehabilitation.”

It is estimated full restoration will cost $35 million.

The school district has been involved in plans to restore the stadium. Though it owns the stadium it has little money to contribute towards repairs. “It’s my desire to see this stadium return to its glory days,” remarked Eileen Shafer, acting superintendent of the school district.

Some of the speakers, including the schools superintendent, recollected watching the Thanksgiving Day football match between Eastside High School and John F. Kennedy High School.

LoPinto has suggested the school district return ownership to the city. There have been some talks of the district returning Hinchliffe Stadium over to the city in exchange for Bauerle Field. Nothing has been finalized yet.

The stadium opened in 1932. It is one of the few remaining stadiums where the legendary Negro League held baseball games. Baseball greats such as Larry Doby, Leroy “Satchel” Paige, Josh Gibson, Judy Johnson, James “Cool Papa” Bell, and Oscar Charleson played at the stadium. The stadium was made part of the Great Falls National Historical Park by the U.S. Congress in December 2014.

Voters in the city, through a plebiscite, agreed to borrow $15 million to repair their stadium. Municipal officials want to leverage the public dollars to raise private funds to restore the stadium.

The first phase of rehabilitation includes $500,000 from the New Jersey Historic Trust and another $300,000 from the American Express Foundation through the National Trust for Historic Preservation.

“This place captures the imagination of people all across America because of its unique role in our country’s treasured pastime and because of its place a reminder of a time when not all Americans had equal opportunities,” said David Brown, executive vice president and chief preservation officer at the National Trust for Historic Preservation. “This is a place that has a future.”

Torres has said he would like to see the stadium fully restored before his current term ends. The mayor is unlikely to have the stadium renovated by that point. He has had difficulty securing approvals from the council to take on debt to restore the stadium.

He invoked mayor John V. Hinchcliffe who borrowed money during the dark days of the Great Depression to build the stadium.

“Let us re-dedicate our efforts in the example of mayor Hinchcliffe,” said Torres. Phase one of the work will start after Labor Day, said municipal officials.