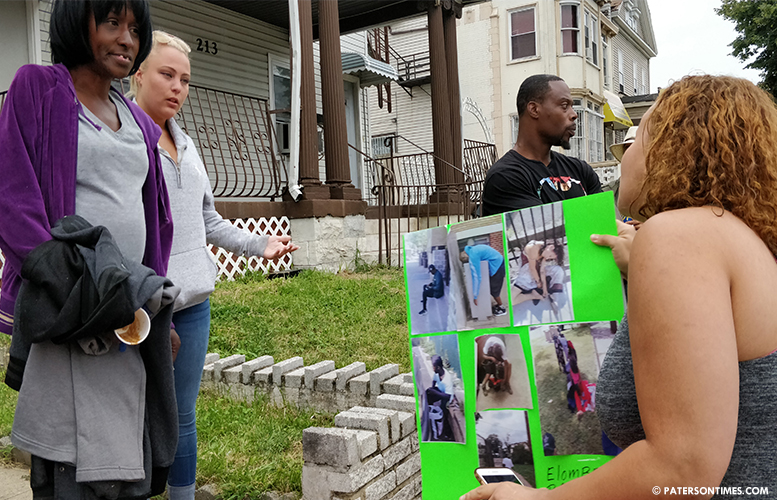 The protest and criticism of the city’s needle exchange program prompted the New Jersey Department of Health on Thursday to issue a $10,000 grant to the Hyacinth AIDS Foundation of New Jersey to clean up discarded needles in a number of locations throughout Paterson.

Eight trained people will be deployed for the clean-up, said Kathy Ahearn-O’Brien, executive director of the Hyacinth AIDS Foundation. She said the clean-up will go on for two weeks. After two weeks, a report will be put together and submitted to the state to figure out the next steps, she said.

Health officer Paul Persaud confirmed the details of the clean-up. He said there was a discussion about discarded needles found in public places this week.

“It’s going to have an impact. It’s a good start,” said Persaud.

Ahearn-O’Brien said the team began deployment on Thursday afternoon. She said the sweeps will run from 10 a.m. to 1 p.m. and 3 p.m. to 6 p.m.

“I’ll believe it when I see it,” said Valerie Freeman, who was one of the protesters calling for the shutdown of the Well of Hope which distributed 5 million needles in the city since 2008. “When the $10,000 runs out what happens?”

Freeman said the Well of Hope needs to take a more active role in ensuring addicts do not discard used needles in public parks and sidewalks. She said the program should be giving discarding boxes – “red containers” — to the addicts to allow them to safely return the dirty needles to the exchange for proper disposal.

“We want a total resolution to this,” added school board member Lilisa Mimms, who was also protesting the program on Tuesday morning. The protesting residents said the program needs to be better monitored after the clean-up is completed otherwise more needles will simply end up in the cleaned places.

The Hyacinth AIDS Foundation runs the Jersey City needle exchange. Ahearn-O’Brien said needle exchange operators generally conduct sweeps around their neighborhood; however, the tight staffing at these programs makes it difficult to conduct these sweeps.

Both Mimms and Freeman were skeptical about the clean-up. There needs to be a permanent plan to ensure needles do not land in public places; without such a plan, the program ought to be shut down, both argued.

“This program needs to go. It’s a hazard to our community and interrupts quality of life,” said Mimms.