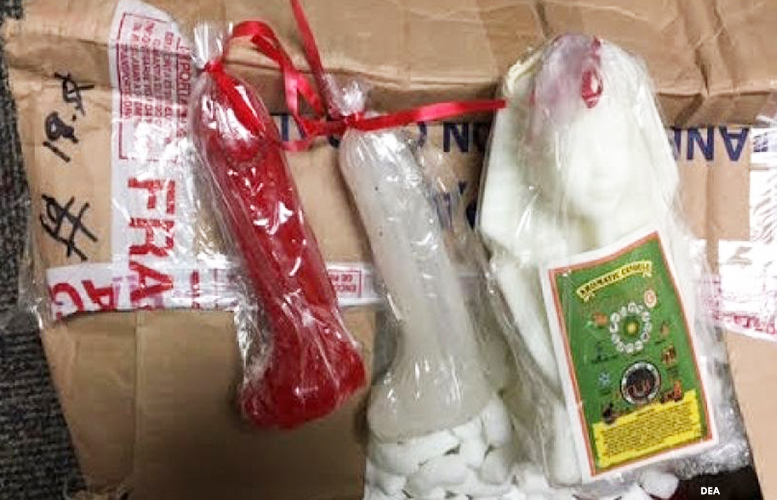 Four men and a woman suspected to be members of a Mexican drug cartel were arrested on Wednesday for allegedly smuggling 1,300 pounds of methamphetamine to a Paterson warehouse for conversion to crystal meth.

Authorities arrested Agustin Zamora-Vega, 30; Orlando Alcantara, 33; Cindy Carrillo, 27; Santos Minjarez, 26; and Jose Luis Gonzalez-Solis, 28, seizing the large quantity of meth that were in the form of penis-shaped candles. Some of the candles were religious themed.

“DEA has seen drugs smuggled in numerous ways:  concealed in puppies, lollipops, furniture, and produce. But secreting a million dollars’ worth of methamphetamine in wax candles of various shapes is shocking,” James J. Hunt, special agent-in-charge of the New York Field Office of the Drug Enforcement Administration (DEA), said.

Zamora-Vega didn’t like the ventilation system at the Yonkers apartment and opted for the Paterson warehouse that had two fans to melt the meth candles to crystal meth.

The group was expecting a large shipment on August 17, 2017 in the New York area. It was later learned that the meth had arrived at a facility in Long Island. Zamora-Vega and Carrillo were to load the candles into a pick up truck and take it to the Paterson warehouse.

All five were staying at a hotel in Saddle Brook at the time. Zamora-Vega previously stayed at a hotel in Manhattan, authorities said.

Shortly after the group unloaded the candles at the warehouse, authorities moved in to make arrests. 27 cardboard boxes containing more than 1,300 pounds of meth candles valued at $1 million was seized. The candles tested positive for methamphetamine.

Hunt said the seizure indicates drug trafficking groups are bent on creating a stronghold of meth users in the Northeast.

“These individuals allegedly possessed more than half a ton of wax candles that would be melted down and converted into crystal meth, eventually introducing more of these destructive synthetic drugs onto our streets,” Angel M. Melendez, the special agent-in-charge of the New York Field Office of Homeland Security Investigations, said. “Drug traffickers are always thinking of more creative ways to store and traffic their drugs. But the ever evolving way in which investigations are conducted and information is shared among law enforcement is key to identifying and prosecuting these criminals.”

“As creative as these defendants were, allegedly hiding dangerous drugs in a common household item, law enforcement was on top of this newest scheme,” Joon H. Kim, the acting United States attorney for the Southern District of New York, said.