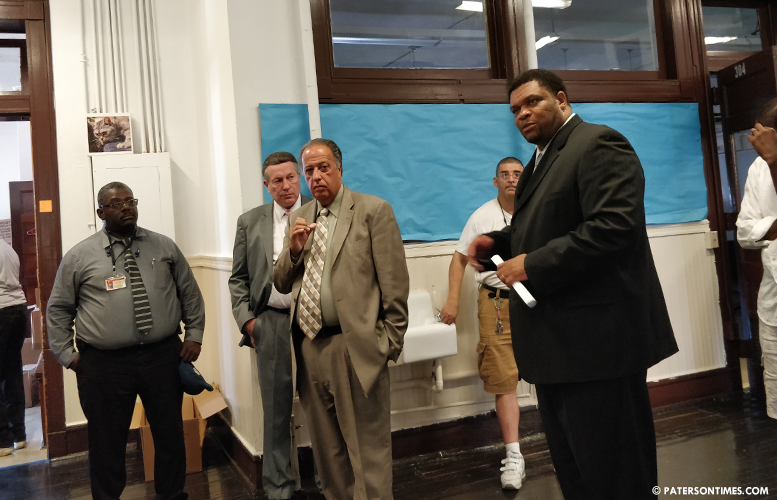 The uneven floors in the bathroom. The big puddle of water that greeted people in the cafeteria serving area. The sorry shape of some classrooms. And the dingy lighting throughout the buildings. All of these — issue at School 11 showcased three weeks ago to argue the building was unfit for students – have been addressed at the soon-to-be home of the Great Falls Academy.

Acting superintendent Eileen Shafer led a tour of the building on Tuesday afternoon to highlight the changes that have been made in the building. Her staff showed off the new tiles and fresh paint in the classrooms. Some of the classrooms and the hallway areas had not been painted in decades, said Steve Morlino, director of facilities at the Paterson Public Schools.

“It’s a complete transformation,” said school board member Emanuel Capers after the tour. He led the tour three weeks earlier pointing out the problems in the building. He was happy to see the sliding door in the cafeteria had been replaced and the rusted pipes no longer visible in the eating area.

“I’m satisfied with it. This school is now high school ready,” said Capers. The renovation work at the building so far has cost approximately $150,000, said Morlino.

There is still work that remains to be done at the school building. Morlino said air conditioners have been installed at the different rooms. However, when the group visited room 208, worst in the building, it was unusually warm and muggy.

Morlino is waiting on three more air conditioning units, he said. Other issues discussed in last month’s walkthrough was security in the area.

The school building is in a high crime area and surrounded by different street gangs. Former mayor Jeffery Jones and councilman Luis Velez grilled the district’s staff on their security plan for the building’s outside.

John Setteducato, a math teacher at the Great Falls Academy, expressed concern about security. “I want to go home to my wife and daughter and not have to worry about this,” he said.

On the inside, the district has re-keyed doors to monitor and control access. It will also have a police officer on site throughout the day. On the outside, there will be a police officer and a security officer at the entrance to the building every morning.

There will also be metal detectors and security cameras inside and outside the building. The cameras will be installed in three weeks, according to James Smith, head of security at the district.

“My concern was the outside,” said Velez on Tuesday. He worries there will be more traffic congestion on Market Street and a flood of students from the many schools in the area will cause mischief.

Former police lieutenant Ronald Humphrey said district officials have visited the businesses on Market Street and have provided them contact information to call school security if students from the alternative high school engage in mischief.

“Have we established safe corridors with the police department, sheriff department?” asked Jones. The “condition” on Park Avenue and Market Street required even football players to have security, he said.

There is no safe corridor yet, said district officials. Students will have to walk through “the belly of the beast” or rival gang controlled areas to get to the building, said Jones. Shafer said students will be provided bus tickets to avoid walking to school.

Zatiti Moody, principal of the Great Falls Academy, said the school will also have different start and dismissal times for students.

Much of the concerns emerged when the district decided to relocate the Great Falls Academy from its Prospect Park home to School 11 site. The school has about 50 students.

Velez and Jones were not happy with the security plans. Both doubted whether a safe corridor would be established for Market Street.

“I saw the security plan. I was satisfied with it. Everybody’s going to do the best they can. There has to be more talks with the Paterson police and sheriff’s departments,” said Capers.