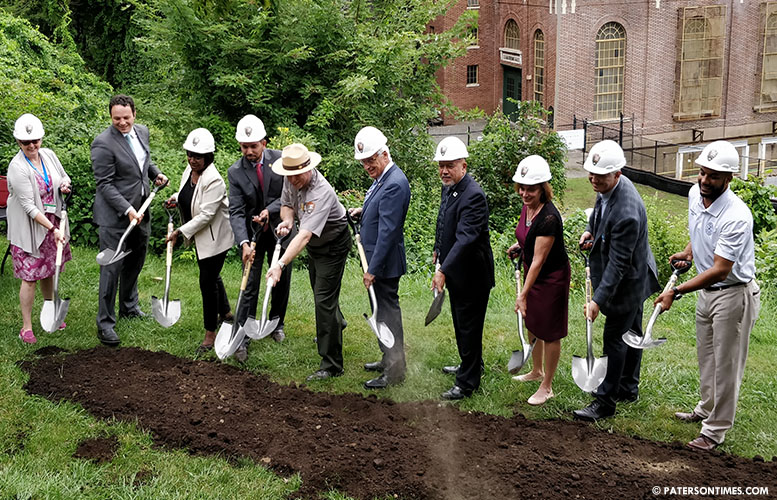 The city broke ground on the second major improvement project at the Great Falls National Historical Park on Monday afternoon. Shovels went into the ground at the Overlook Park for a $3.2 million project that includes a connective pathway to Mary Ellen Kramer Park, an earthen and stone seat amphitheater, and a plaza providing a breathtaking view of the sublime water fall.

“Overlook Park is a gateway to our Great Falls National Historic Park. These improvements offer the region with possibilities of recreation and tourism within the backdrop of our city jewel,” said Rep. Bill Pascrell.

This gateway off of McBride Avenue extension saw 177,000 visitors in 2016, according to statistics released by the National Park Service. Mayor Jose “Joey” Torres and others want to see this number climb further up to turn the Great Falls into an economic engine to rebuild prosperity in this old industrial town that was the birthplace of the American Industrial Revolution.

“Our past and our future is intertwined with the Great Falls and working towards the improvement of this land is a demonstration of respect and admiration of our industrial past,” said Torres. “It also allows us to offer residents and the region with a prime visitor’s experience where they have access to the beauty of the landscape in middle of our city.”

This is the second biggest project at the falls after the renovation and re-opening of Mary Ellen Kramer Park in the summer of 2015. That was an almost $2 million project. That project dragged on for a long period of time. The Overlook Park project is expected to be completed by the summer of 2018, according to Gianfranco Archimede, director of the Historic Preservation Commission.

The renovation project brings together federal, state, county, and local governments, said Darren Boch, superintendent of the Great Falls National Historical Park. $1.93 million for the project is from the state. $567,000 from the county, $655,000 from the National Park Service, and $150,000 from the city, according to the city.

There was also a $1,500 donation from the Passaic County Board of Realtors of a park bench.

“The preservation of this beautiful landscape would not be possible if not for the shared vision of all the partners in this project and their commitment to preservation of this land,” said Bob Martin, commissioner of the New Jersey Department of Environmental Protection (DEP), in a statement.

The state has been a key player in the Great Falls. It has directly and indirectly helped the city to acquire land around the park. For example, it acquired the old Vista site, the old Dairy Queen, and provided funding to the city to acquire ramshackle properties on Ryle Avenue to beautify that area and turn it into a new entrance to the Great Falls from West Broadway.

There are several other major projects that still have to be completed at the Great Falls. For example, the Great Lawn at the former ATP site and improvements to the former Vista site. Last month, the city broke ground on a $1.5 million project to partially renovate the Hinchliffe Stadium.

Freeholder Theodore “TJ” Best, chairman of the Great Falls Advisory Commission, wants to see the typical script, where old timers talk about how great things were, to today’s young people talking about how much things have changed for the better.