Paterson recognizes teachers, other employees for 40-plus years of service | Paterson Times 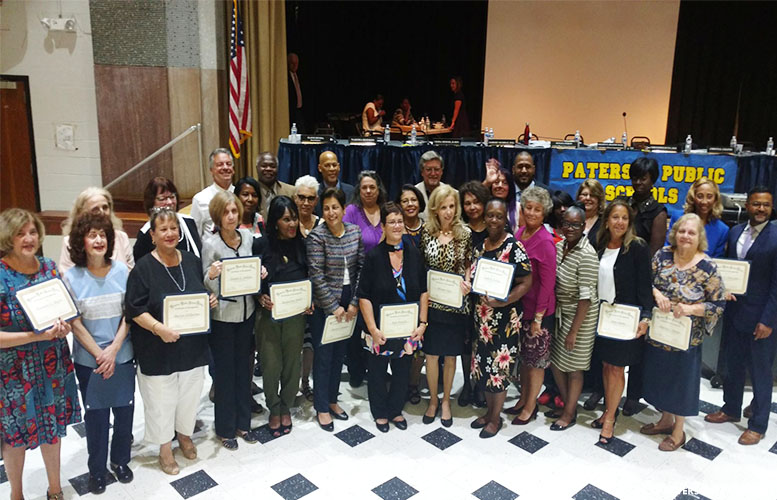 The city’s school district recognized almost three dozen teachers and other employees on Wednesday evening for their forty-plus years of service to the school system. Among them was Marilyn Simon, who is in her 50th year at the district.

Simon has witnessed superintendents come and go. She taught in the district when it was under local control and after state takeover. There wasn’t a revolutionary change in the classroom when the district was seized by the state government, she recalled.

“It was business as usual in my classroom. There was some shakeup. There was less of a priority on art and music and things that really draw the students to come to school,” said Simon, who teaches art at the School of Information Technology at Eastside High School. “Art is what draws a lot of our kids out of their shells. It gives them a way to express themselves and a way to feel positive things about themselves that they don’t feel in a general class.”

“I think the state has caused more problems for the kids. Instead of worrying about the education and learning they are giving us more paperwork. Kids right now need to focus on skills as opposed to testing, testing, and testing,” added Rosemary Begyn, 2nd grade teacher at the Roberto Clemente School, who is in her 45th year.

“Things were smoother,” said Leah Fabian, a teacher at School 8, when the district was under local control. She has been at the district for 43 years.

Many were cheerful about the district’s future. “We’re beginning to grab it back again,” said Simon of art education. She has confidence in acting superintendent Eileen Shafer to change the district for the better.

“She was very good to me,” said Simon. Shafer was supportive of her when she was battling breast cancer, said Simon almost tearing up.

Shafer has thrown her name in the hat for a permanent appointment to the district’s top job. “I hope she makes it,” said Simon.

Simon said in her decades at the district, her favorite superintendent was Frank Napier, the city’s first African-American schools chief.

“He was 100-percent for the kids and staff of Paterson,” added Begyn.

Napier was superintendent when the state took over the schools in Paterson. A state report criticized Napier for being isolated from daily operations and lacking vision for the district. His “management was characterized by an inability to demonstrate an understanding of the role and function of a chief school administrator,” the report stated. This didn’t stop local sages from naming School 4 after Napier. The same report called the school board inept and too focused on petty things rather than the education of children.

“As long as the governor gets out and we’re out of state control I think things will turn around,” said Begyn. She too sees the district improving in the coming years.

School officials called each of the employees up by name and recognized them for their service by handing them certificates.

“We have 1,280 years of service packaged up between these 32 employees. Think of how many lives they impacted over these 40 plus years,” said Shafer. “How many children they took under their wings. How many hugs they gave these children. How many tears they shared with these children.”

The natural question for many of those recognized is when do they plan on retiring. When asked when she plans to retire, Simon, 72, said, “I have no idea.” She plans to teach art as long as she is able to, she said.