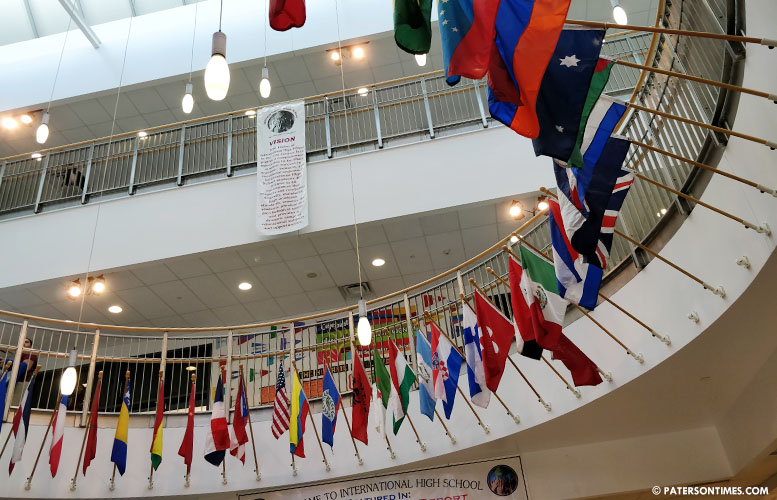 Thirty-eight juniors have been promised the highest quality of education in the world through the International Baccalaureate program at International High School. Their parents joined Paterson school district officials on Wednesday morning to celebrate the opening of the program.

David Pasquariello, a retired firefighter, whose daughter is enrolled in the program, attended the ribbon cutting ceremony. “It’s very good. It prepares them for the real world,” he said. “They have to constantly think. Instead of being on her phone, she’s studying.”

Pasquariello’s 17-year-old daughter Dani is being challenged at the program. Teachers in the program receive special training to academically challenge their pupils. “I hope that all pays off in the future,” he said. He hopes the junior enrolled in the International Baccalaureate Diploma program secures a seat at one of the country’s top tier universities.

“Any parent wishes their kid could get into an Ivy League college,” added Bryant Sims, whose 16-year-old daughter opted for the International Baccalaureate program over attending the Passaic County Technical Institute (PCTI) in Wayne, who views the program as a stepping stone to get his daughter into an exceptional college. “I know the education level is high here.”

Students from IB programs receive a leg up in admission to well-respected colleges.

The city’s school district has long sought to establish a high performing high school to halt the flow of its smartest students to the Passaic County Technical Institute. District officials hope the rigorous IB program will help stem the flow and keep local students in the district.

“You are the proof that Paterson students can compete among the very best of any school district in New Jersey,” said acting superintendent Eileen Shafer. “When you leave our district, you will be armed with a world recognized and specialized education.”

There are 23 IB “World Schools” in New Jersey. There are 1,866 throughout the United States. The district was authorized by Geneva-based International Baccalaureate to run the program in April 2017.

The European origin of the program has led to criticism from conservative quarters that the International Baccalaureate program is anti-American. Places like Utah, Michigan, and Pennsylvania saw protests against the program. At Wednesday’s ceremony, students from the program performed Chinese dances as Asian music played in the background. Students at the program also learn one of the Chinese languages.

Some have argued the program, with its emphasis on a globalized world and education for peace, seeks to undermine American values. No such controversy erupted in Paterson. The district has taken a pragmatic approach to secure a program that has been successful elsewhere to expand higher education opportunities for its students.

There are 128 students involved in the IB program — 38 juniors in the Diploma program, 37 sophomores in IB courses, and 53 in pre-IB, according to Catherine Forfia-Dion, the district’s International Baccalaureate coordinator.

The district provides information about the IB program to all students in the eighth grade. Forfia-Dion said every eighth-grade classroom receives a visit and students are encouraged to apply. Every student is given an interview, she said.

Forfia-Dion said the program isn’t just looking at grades, but other factors like grit and perseverance. She said a committee determines who is accepted. The district is hoping to recruit 100 students next year.

“The door to the future has opened. Seize this opportunity,” deputy superintendent Susana Peron told the students and parents in the auditorium of International High School.