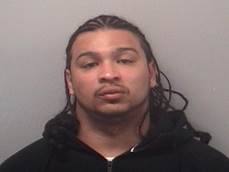 A city man was arrested after a chase in the area of 12th Avenue early Sunday morning, according to Passaic County Sheriff Richard Berdnik.

Michael Espino, 25-year-old, was arrested on two weapons and a resisting arrest by flight charges at around 3:30 a.m., authorities said.

Espino was among a group of people loitering and drinking in public in the corner of 12th Avenue and East 24th Street. Officer Jason Michaels approached the group in his sheriff’s unit and observed Espino, dressed in a black hoodie with black sweats, began to scurry towards East 25th Street.

As Michaels was getting out of his patrol car to conduct a field interview, Espino ran towards East 25th Street. The officer began to follow the suspect in his unit. Another officer Martin Sanabria was in the corner of East 24th and 12th Avenue.

Sanabria observed Espino reach into his front waistband, pull out a chrome handgun, and toss it to the ground. Michaels stayed with the handgun while Sanabria followed down East 24th Street towards 11th Avenue in his unit.

Sanabria got out of his car and began chasing Espino while yelling several times to stop. Backup officers Craig Goodson and Kelly Lincoln were called in. Officer Sanabria was able to apprehend the suspect.

“I want to commend the quick thinking and acting Officers involved in this arrest. The PCSO will continue to make the removal of handguns off our streets a major priority,” Berdnik said.