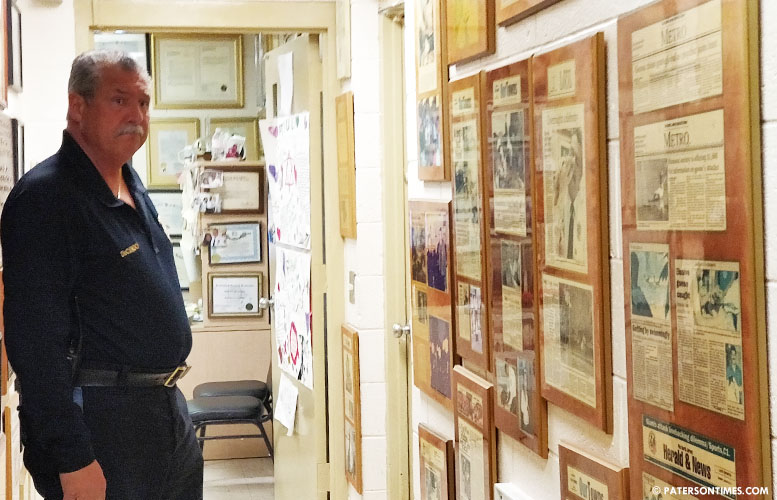 The city council is expected to consider a measure to name the new dog park on River Street after longtime animal control officer John DeCando.

“I’m really proud. Usually, when you name a park after somebody they are already gone,” said DeCando, who has been working for the municipal government for 42 years, on Tuesday morning. “We’ve done a lot of good. A lot of good. We saved a lot of animals.”

Rosenberg said the shelter also allegedly did not properly follow state euthanasia procedures that may have been inhumane. He also states the shelter provides little or no veterinary care as required by state law, is not open for legally required operating hours, prohibits public from volunteering at shelter, does not adopt out animals itself, has a high kill rate, and had missing records that suggest the situation is worse at the shelter than documents show.

DeCando dismissed the criticism coming from Rosenberg. He said the shelter only puts down animals that are vicious or badly suffering. “We don’t do anything wrong here. We’re here to protect and serve our four-legged friends,” he said.

DeCando (pictured) runs a division of six employees. He said individual volunteers are barred for their own safety. “We deal with a lot of dangerous and vicious dogs. God forbid somebody ends up getting bitten by one of dogs and something happens,” he said.

The shelter works with different rescue groups that provide assistance, he said.

Rosenberg laid bare grim statistics from reams of documents he secured from the municipal government through an open records request. He reckoned from the data 19-percent of cats and dogs were killed at the shelter in 2015.

“Nearly 1 out of 3 adult cats it took in during 2015 [were killed],” wrote Rosenberg in a series of articles published in his blog. He undertook a struggle to obtain records from the government that ultimately lead to a lawsuit. The city either failed to provide complete records or improperly redacted documents.

Paterson had to pay $5,194 to settle the lawsuit filed by Rosenberg. His battle with the city gained the attention of former mayor Jose “Joey” Torres who described the high kill rate as shameful in a public meeting.

Torres also moved to fix some of the flaws Rosenberg pointed out in his blog entries. For example, Torres proposed to move the shelter to a better location to make it more welcoming for animal lovers.

Torres also sought to display the animals to encourage direct adoption from the shelter. Rosenberg recognized animal rescues are doing much to help at the shelter. One of those rescue organization is the Second Chance Pet Adoption League of Morris County.

Stephanie Pearl, president of Second Chance Pet Adoption League, whose organization has been working with the Paterson animal shelter for 25 years, said the shelter is clean and often contacts her group to find homes for animals.

“He’s been very accommodating compared to other shelters,” said Pearl. “The main issue is overbreeding, overpopulation, and zero responsibility.” Some people get pets without planning or long-term thinking only to release them into the streets.

“We have saved tens of thousands of animals with the help of those groups,” said DeCando as he walked passed a small hallway at the Ryle Road shelter that is decorated with the numerous news stories that highlight his work in the city.

DeCando was born and raised in Paterson. He attended School 18 and graduated from Paterson Catholic High School in 1972. He started working as a housing inspector for the city in 1975 and later promoted to chief animal control officer. The resolution to name the dog park “John DeCando Dog Park” states he was recognized by the state’s governor through a proclamation and by the Humane Society of the United States for rescuing animals from the Passaic River.

Council members will take a vote on whether to name the dog park after DeCando tonight at 7 p.m. at City Hall.