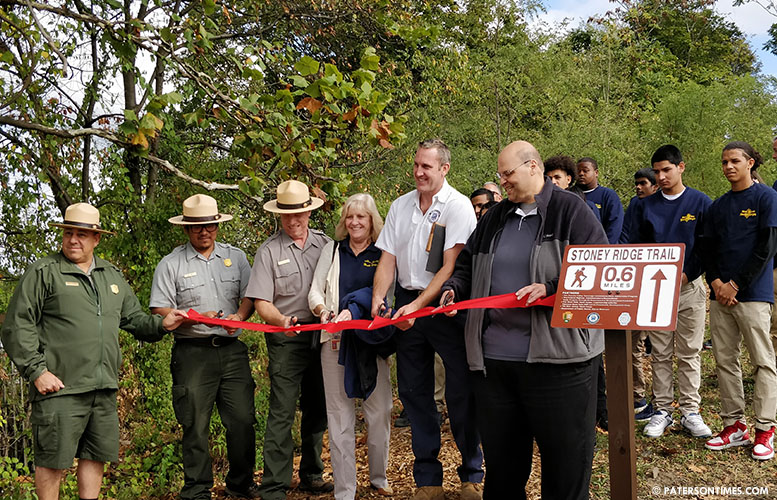 The half-mile long Stoney Ridge Trail opened at the Great Falls National Historical Park on Friday afternoon. Visitors will start at the nature trail across the street from Libby’s Restaurant on McBride Avenue, tread up a scenic wooded area, and get to an overlook atop the ridge that provides a panoramic view of the Silk City beginning with the mills on Spruce Street.

Trail which is 0.6-mile long ends at the Lou Costello Memorial Pool. But, visitors are able to continue walking past the slightly visible Levine Reservoir, through the walkway by the upper raceway, and end at the corner of Spruce Street and McBride Avenue extension.

Park ranger Erik Sosa said it took two and a half years to re-establish the trail. He said steps had to be built to tame the rough terrain. He said the overlook with the new railing that provides a sweeping view of the city was a coal dumping site that had to be cleared. Concrete dumped at the site also had to be removed.

“It’s not your average trail. We wanted to give the experience of being inside a quarry and being in a rugged terrain in middle of an urban environment,” said Sosa.

“There are places in and around the Great Falls where you can go for a nice walk in the woods,” said Darren Boch, superintendent of the Great Falls National Historical Park. He said a trail was established in 1995. That trail was not maintained and plant overgrowth eventually claimed it. Some of the wooden railings from that time remained at the Stoney Ridge Trail.

The trail was once a cobblestone road constructed by the Essex County Road Commissioners in 1796. At the time the area that would become Paterson in 1837 was part of Essex County. Throughout the second half of the 1800s and the first half of the 1900s, the trail was the primary route into the city’s mills, factories, and plants. It later became a route to explore the area around the Great Falls and the historic mills.

The Stoney Ridge Trail eventually became impossible to walk through. The Passaic Valley Sewerage Commission’s River Restoration Department cleared the way for a nature trail and put in a handrail.

“The Great Falls are not only an important symbol representing the Paterson community, but also a significant national treasure. In addition to playing a vital role in the American Industrial Revolution, they boast natural beauty and are also surrounded by a quiet, forested area,” said Thomas Tucci, Jr., chairman of the Passaic Valley Sewerage Commission. “As one of the largest wastewater facilities in the country, it is PVSC’s mission to act as good environmental stewards at all times. Routinely cleaning not just the Great Falls, but also the beautiful surrounding area, is a critical part of that process.”

Boch said the Passaic Valley Sewerage Commission has been working closely with the city’s national park since 2011. “Even though we have a number of great partners on the rehabilitation we simply could not have finished this trail without the resources and dedication of the PVSC,” he said.

The rail cost about $4,000 and was covered by school district and the National Park Service. It was purchased from Majka Railing Company on McBride Avenue. Keith Majka was at Friday’s ribbon cutting ceremony to open the trail.

Majka opened the company in Paterson in 1975. He also has his employees regularly clean the large lot passed the S.U.M. Gatehouse on the corner of McBride and Wayne Avenues .

There was also funding from the New Jersey Department of Environmental Protection (NJDEP).

“A trail like this gives more meaning to the richness of this neighborhood,” said Bob Guarasci, director of the New Jersey Community Development Corporation (NJCDC) which sponsors the Great Falls Youth Corps.

Guarasci is also a member of the Great Falls Advisory Commission.