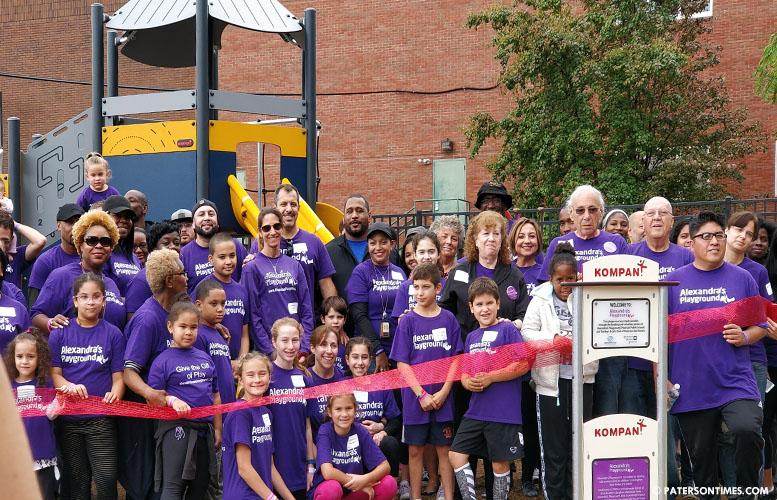 The students of School 4 and School 28 in the Riverview section received a new playground on Saturday afternoon. Dozens of volunteers spent the day claiming an asphalt section behind School 4 for the new playground that includes slides and a jungle gym.

One of those volunteers was Tyeisha Taylor. Her son Tyler is a fifth grader at School 4 which is also known as Frank Napier Academy.

“It’s good to have an actual piece of playground to play in. It’s safe. The kids feel safe coming back here than they do going to the outside park,” said Taylor. “I’m happy that my son’s school has an actual playground.”

Parents are uncomfortable sending their children to the nearest park on Presidential Boulevard between West Broadway and Temple Street, she said. She plans to bring her son to the new playground on the weekends.

Taylor and other parents were grateful to Alexandra’s Playground which provided the $60,000 worth playground. Site work was paid for by the Boys and Girls Club of Paterson and Passaic.

“This has been a long time coming,” said Marc Medley, principal of School 4. There are some play equipment for middle school students at School 4, but there was none for elementary school children until Saturday, he said.

The playground is suitable for children ages 5-12. Approximately 900 students from both schools will use the new play area.

Volunteers and school officials held a ribbon cutting in mid-afternoon to celebrate the completion of the new playground.

Acting superintendent Eileen Shafer thanked the volunteers for dedicating their time to build the new playground. “You gave up a Saturday. You came here and you worked for the children of Paterson,” she said.

This is the 4th playground Alexandra’s Playground donated to Paterson.

The nonprofit previously installed playgrounds at School 26, School 29, and School 27. The group founded by Andrea and Michael Vitale celebrates the brief life of their daughter Alexandra and her spirit of play by building playgrounds throughout the United States and the world.

This is the organization’s 23rd playground.