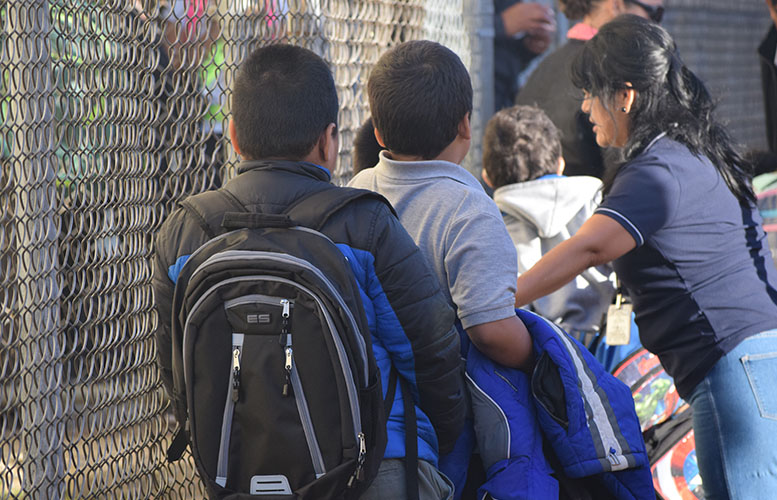 The city’s school district assigned an off-duty police officer to the Edward W. Kilpatrick School on Friday morning in response to parents’ complaints of drug addicts, prostitutes, and vagrants hanging about the elementary school.

Some parents shared their firsthand experience having to deal with drug addicts and prostitutes while walking their children to school.

“It’s horrible. Especially during school hours. You see them out here. One day, I was walking with my son. They were shooting drugs, right here on the street, in front of the church. I yelled at them and called the cops,” said Antoinette Dean, who dropped off her eight-year old son, who is in the third grade.

Dean also works as a substitute teacher at the district. She was not working on Friday. Like Dean, David Velasquez came to drop off his five-year-old granddaughter.

“I have to argue with them. Sometimes I tell them to get out and they curse me out,” said Velasquez. He said the problem is most pronounced in the back of the school by the parking lot. “I ask them, ‘Do you have kids in the school?’ They tell me, ‘No.’ So I tell them, ‘Then you’re not supposed to be out here.’”

Velasquez said children sometimes inquire about the prostitutes and drug addicts. “Kids ask me, ‘What they are doing out here. Why are they going through cars?’ I can’t explain it to them. Sometimes, I explain to them, ‘They’re looking for their kids.’ I lie to them because they are little.”

The school educates roughly 450 students in the lower grades, pre-k to fourth grades, according to state data.

The grandfather put up a sign that stated no drugs or hookers. He said the sign halted them for a while, but the sign was knocked down and things returned to normal.

“It’s terrible out here. The kids look out the window from the second and third floor. You see them all lined up. Even when they go outside for lunch they’re all on the backstreet behind the library,” said Logan Roberts, a teacher at the Edward W. Kilpatrick School, of the addicts and sex workers. “No respect for the school.”

The school nurse, Aranibar Evangeline, said one time, in this school year, a tractor truck pulled up in front of the school on the Summer Street side, and proceeded to pick up prostitutes. “The buses couldn’t even park here,” she said. School board member Lilisa Mimms confirmed the incident.

Police had to be called, but the truck remained there for more than an hour. Police sergeant Louis Pacelli on Friday patrolled the vicinity of the school.

“That’s what we need. That will help,” said Velasquez of the police officer. He said two officers, one for the back and another for the front of the school, would help greatly.

“I hope it works,” said Evangeline.

The school sits in an area infested by drugs. Velasquez recalls when his eldest daughter was attending the same school years ago.

“It was nice,” said Velasquez. He said there would be the occasional marijuana puffer, but teachers would scare them off. That no longer happens, he said. “Teachers are scared,” he said.

The drug addicts and vagrants of today are very different from those of yore.