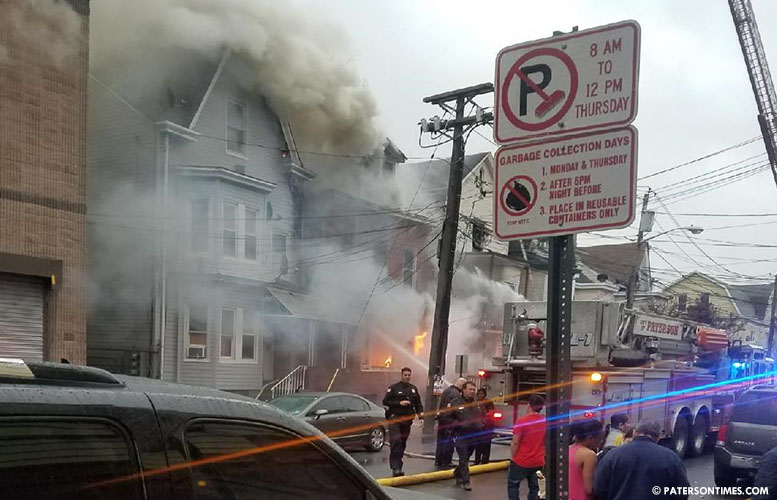 Two and a half dozen people were displaced from an early Monday morning fire that started at an East 22nd Street house and damaged homes on both sides, according to fire officials.

Firefighters spent the morning battling the three-alarm blaze. Postorino said there are still hot spots in the building that have to be extinguished. He said the third floor of the building collapsed onto the second.

661 East 22nd Street has to be demolished for the fire to be fully extinguished, said the chief.

There were no reported injuries or fatalities, said Postorino. There were early reports of people trapped inside the building.

“Somebody was yelling. I heard noise. I didn’t know why they were yelling. I opened the door. There was a lot of smoke. Everything was catching fire,” related Leon Swinney, who lived on the second floor of the destroyed building with his mother. He said the stairs were on fire, but that did not stop Swinney from running up and down to get all his neighbors out of the burning building.

“I went into rescue mode,” said Swinney. He got to everyone except in the attic, he said. One woman escaped out through the window of the burning building, he said. “She jumped to the next roof because it was on fire. That was her only option,” he said.

Postorino said firefighters rescued the woman from the roof.

Lenora Linton, who lives on the first-floor of the destroyed house, was not home when the fire broke out.

“I lost everything,” she said while sobbing. “I wasn’t even home.” She lived on the first floor for two years, she said.

“I don’t know what’s going to happen,” said Pedro Delacruz, who resides next door, 659 East 22nd Street, to the badly burnt building. He was forced out of his apartment. He didn’t even have time to get his shoes, he said.

Delacruz watched as the red building burned. He couldn’t go to work for the day, he said.

Swinney said he is being provided two-day hotel stay. He just paid his landlord and was not sure what he will do after the temporary stay ends.

Swinney said it was an electrical fire. Fire officials at the scene said the cause is still under investigation.

Arismendy Tejeda, a taxi company owner, who was driving in the area, saw the street filling up with smoke before firefighters responded to the scene. “I saw the smoke and called police,” he said.

“People in Puerto Rico are worse off than me,” said Swinney. He said he was glad to get out of the building alive.