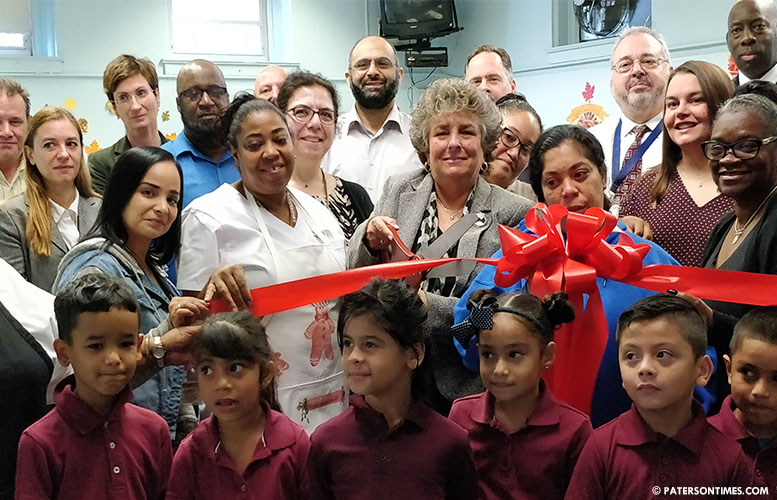 The city’s school district unveiled a renovated and expanded cafeteria at School 3 on Monday morning. Bertila Gutierrez, president of the School 3 Parent Teacher Organization, was overjoyed at seeing the much-improved cafeteria.

Gutierrez and other parents complained for three years about the poor conditions of the cafeteria at the more than a century old school building and submitted a petition to the district demanding improvements.

“A lot of the kids were not liking the lunches,” said Gutierrez. She said students were not eating lunch. “Now they are serving it nice and hot. Straight into their serving tray.”

Chicken strips, cheese spreads, burritos, and tortillas are now being prepared in the school’s new kitchen which was part of the $132,000 renovation. “The kids are enjoying the food,” said Gutierrez, whose 8-year-old daughter and 11-year-old son attend the school on Main Street.

“The goal here was to be responsive to our parents and the community. The other was to provide our children with better meals,” said acting superintendent Eileen Shafer. “What’s better than warming up prepared food is cooking right here. That homecooked meal is better than the microwaved. Our children now have homecooked meals at School 3.”

The small lunchroom was repainted and new flooring was installed. An even small rectangular room connected to the cafeteria now has a serving counter for students to line up for their meals. A third room that had asbestos was cleaned up, painted, new flooring installed, and made part of the cafeteria.

There was also plumbing and electrical work done at the cafeteria. New air conditioning renders the cafeteria temperature controlled. The antiquated refrigerator at the school was replaced with a new one. And a new double oven will soon be installed.

District staff handled the renovation work at the school.

A number of collapsible lunch tables from the old Young Men’s Academy building have been re-purposed for the School 3 gym. The old café had space for 72 students. Tables at the freshly painted gym allows seating for 92 students. This doubles the lunchroom capacity.

“It’s definitely an upgrade — ten folds,” said school board president Christopher Irving. “This wouldn’t have happened without you,” he said pointing to the three parents who attended the ribbon cutting for the renovated cafeteria.

Gutierrez credited Shafer for the renovation. For three years parents have been complaining about the condition of the cafeteria.

“I’m very happy to see the change,” said Steven Rodriguez, principal of School 3. He said the increased capacity will allow for more orderly lunch periods at the cafeteria.