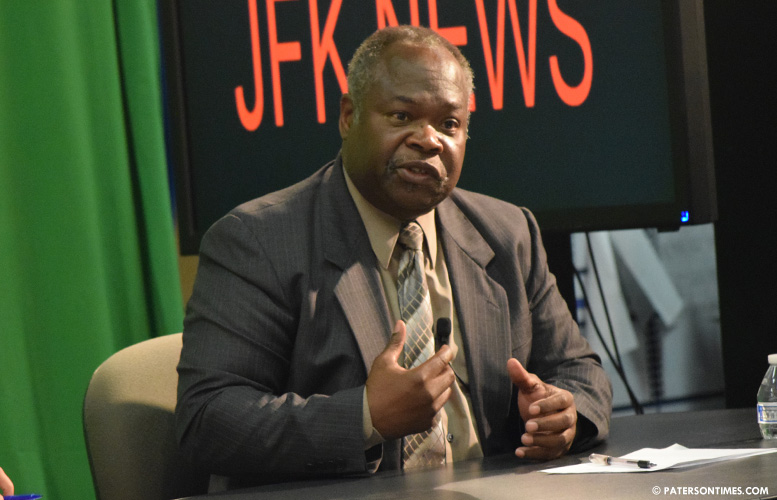 The city’s longest serving school board member Jonathan Hodges defied detractors to win re-election to a sixth term on Tuesday night. He was first elected to office in 2002.

“I’m deeply heartened by the people of Paterson. I’m very grateful to the voters,” said Hodges on Wednesday morning. His main rival on the board of education, school board president Christopher Irving, wanted him out. “I’m very very thankful they chose to return me. I intend to come out and fight for the things we need. There are a lot of issues we face.”

Hodges spent the week leading up to Election Day vigorously campaigning door to door, according to his friend and former school board member Corey Teague.

“I did not wish to lose a single vote or leave any house unapproached,” said Hodges. He received 4,443 votes. Community leader Joel Ramirez secured 4,476 votes. And former school board member Kenneth Simmons regained his seat and became the highest vote-getter last night with 4,738 votes, according to unofficial results.

The biggest surprise of the night was the defeat of two-term school board member Chrystal Cleaves.

“The people voted. They voted 1, 2, and 3. And the first three people on the ballot were victorious. It was all about ballot positions,” said Cleaves on Wednesday morning. Ramirez, Simmons, and Hodges were the first three names on the ballot. “We did our best. The people have spoken. This is what democracy is. I’m at peace with this.”

When asked if she has plans to run for school board next year or in the foreseeable future, Cleaves replied, “When I went into this election, this was supposed to be my last election running for the Paterson board of education. At some point we need to be molding and training the next generation behind us.”

Cleaves indicated she has no plans to run for the school board in the future. She unsuccessfully ran for the 5th Ward city council seat in 2016. She would not rule out a future run for a council seat.

The defeat of Cleaves, who is the vice president of the school board, weakens the faction headed by Irving, according to political observers. However, that depends on which way Simmons and Ramirez decide to go.

“That was a big upset last night,” said Teague. “When I was heading into city hall, he [Irving] was coming out with his head down. That told me everything I needed to know.”

“I’m certainly disappointed at Chrystal Cleaves not being re-elected, but not surprised Dr. Hodges got re-elected. Here’s the truth: no one really ran a campaign against him,” said Irving on Wednesday afternoon. He said he supported both Simmons and Ramirez. He still has four solid allies on the school board in Flavio Rivera, Nakima Redmon, Manny Martinez, and Oshin Castillo.

The school board president said he has not spoken to Hodges since election night. “I’m willing to work with him if he wants to work together,” said Irving.

Teague pointed to a business card that lacked the legally required “paid for by” label that urged voters to support Simmons, Cleaves, and newcomer Fannia Santana.

“They were handing thousands of these out yesterday,” said Teague. “They are illegal.” The business cards promoted the Democrats’ gubernatorial candidates on one side and “Democrats for school board” on the reverse.

Paterson school board elections are nonpartisan. The Passaic County Democratic Party is often punished by voters for backing candidates in local non-partisan elections. Most famously, in 2014, when councilman Andre Sayegh suffered defeat after he was endorsed by the Democrats.

“That sends a strong message to them and the whole establishment,” said Teague citing the loss suffered by Cleaves and Santana. Other unsuccessful candidates were Joyed Rohim, Andres Scott, and Sebastian Mejia.

Mejia made a splash in the city’s political scene. Teague, who mentored Mejia, said the newcomer did well in his first election.  Mejia performed well in the candidates forums virtually winning the three school board debates.