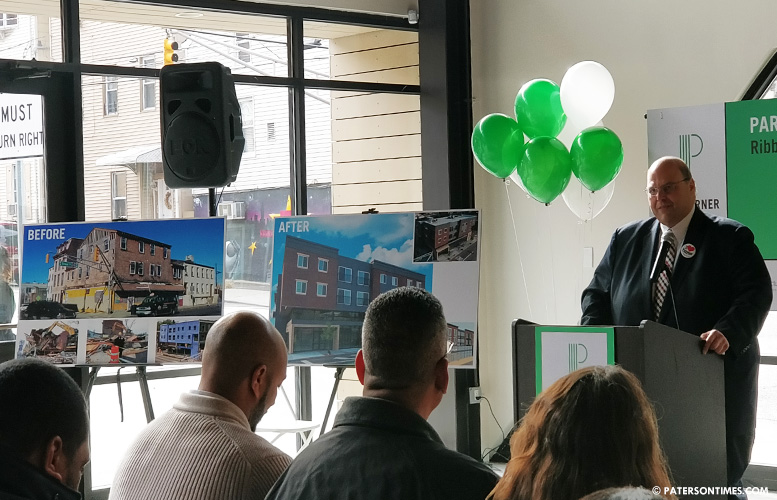 The once blighted corner of Grand and Spruce Streets, which is one of the key entrances to the Great Falls, has been transformed by a $4.2 million mixed-use development. Officials celebrated the opening of 11 apartments in the upper floors and 2 retail spaces on the lower level at 96 Spruce Street with a ribbon cutting ceremony on Thursday morning.

“The two buildings that stood here epitomized the phrase ‘urban blight,’” said Bob Guarasci, president of the New Jersey Community Development Corporation (NJCDC), standing inside the new building next to the before and after image of the corner. “We knew something had to change.”

Four years ago, Guarasci had a vision for the corner. He wanted the ramshackle structure replaced with something pretty for visitors to see when getting off Route 19 on their way to the Great Falls National Historical Park.

“I remember Bob just saying, ‘I want that corner.’ He didn’t say he wanted the building, he just said, ‘I want that corner because it’s the gateway to the new national park that’s coming,’” recalled Passaic County freeholder Theodore “TJ” Best. That conversation happened almost a decade ago when a fire ravaged the bodega that that stood in the corner.

“I’m happy,” said councilman Luis Velez, who represents the 5th Ward, where the new building is located, describing the boxy new structure as “beautiful.” He would often ride pass the building worrying the fire damaged structure that leaned could collapse.

Guarasci had to find the funds to purchase the site and build the new structure. Bulk of the funding for the project came from a $1.5 million grant from the U.S. Department of Housing and Urban Development (HUD) HOME grant via the City of Paterson, $1.5 million from the state’s Neighborhood Revitalization Tax Credit Program (NRTC), and $1 million from a bank loan. Then came the hurdle of securing approval from the city.

The nonprofit went before the city’s zoning board in Dec. 22nd, 2014. It did not secure approval until March of 2015. The new apartments, in a city suffering from a shortage of housing, was welcomed by acting mayor Jane Williams-Warren.

Williams-Warren’s predecessors spent much time encouraging affordable housing which has concentrated poverty in the city.

All 11 units of affordable housing at the Park Corner Plaza have been rented out, said Guarasci.  The two retail spaces are presently vacant. Guarasci said there’s interest in the spaces from a pharmacy and a coffee shop. Some dream having a Starbucks on the site.

Sylvia Smallwood and her young son moved into one of the apartments in July.

Smallwood is pleased with her new apartment. She moved from the corner of 12th Avenue and Auburn Street in the crime-ridden 4th Ward.

“It’s so quiet here,” said Smallwood. This is a welcome change from the loud music that kept the single mother and her son up in the late night. She also does not miss the sound of gunfire in her old neighborhood.

“We need more projects like this in Paterson,” said Velez.