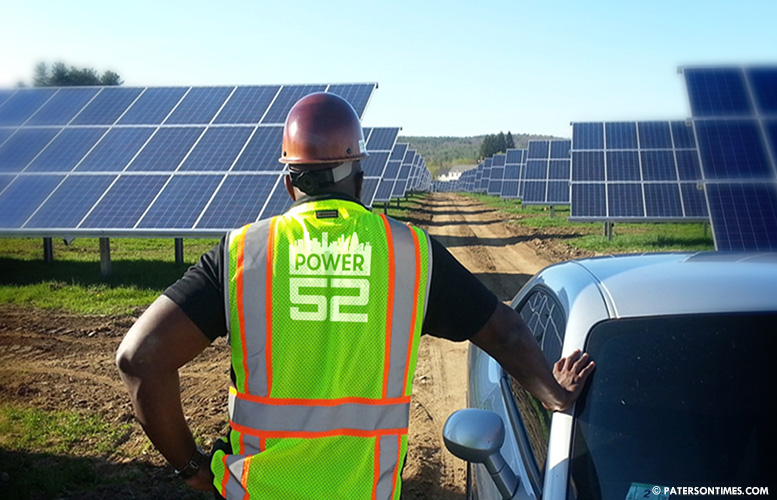 The former linebacker for the Baltimore Ravens Ray Lewis last week proposed a solar energy and job-training project for Paterson. Lewis was among three men from Maryland-based nonprofit group Power 52 to pitch a 20-megawatt solar farm to the city council on Wednesday night that will cost $64 million.

Power 52 will install 100 acres of solar panels on land and rooftops in the city. This will create 150-200 jobs for the local economy. There’s also a school that’s tied to the project to provide training to the city’s young people.

“This is moving Paterson into the future. This is getting ahead of the curve. This is setting trends, not following trends,” said Michael Jackson, 1st Ward councilman, who arranged the presentation before the council. “This is a way in which Paterson can own its own electrical plant.”

Jackson said the city could save as much as $1 million by powering street lights using solar power. He wants the city to use some of its $130 million state tax credit to support the project. It’s not clear whether the project will qualify for the tax credits. For example, the Economic Redevelopment and Growth (ERG) program requires the project to be a development and not equipment, according to city officials. Solar panels being equipment.

“I don’t know much about it,” said Tony Perez, director of the Paterson Parking Authority, when asked about the solar farm project. “We’d be willing to listen.” His agency is playing a key role in the way the city will use the tax credits.

Much of the tax credits have been earmarked for other projects. There’s a proposed expansion of the Center City Mall and projects in the Great Falls area. Jackson said the projects close to the Great Falls which are to accommodate tourists will do little to generate revenue for the city.

Jackson highlighted the job creation aspect of the solar farm. Young people will go through a 16-week training program to earn credentials that will allow them to work in the renewable energy industry.

“We use our program as a launching pad for careers in renewable energy,” said Robert Wallace, chief executive officer for Power 52. He said the 150-200 jobs will be generated over a 25-year period.

Wallace noted the school tied to the project will train dozens of people per year.

The project itself will not require much labor. Installation will be done by 50 workers and 10 employees will be needed to maintain the system once it is online. Those trained will have all the necessary skills and credentials to secure well-paying jobs in the solar industry, according to the group.

Wallace recognized the city does not have 100 acres of land for solar panels. However, that won’t be a problem, he said. The solar panels will be setup in different sites. Elevated panels can be placed along the Passaic River, on rooftops, and on contaminated land.

Lewis said the Power 52 organization was setup after the police-involved death of 25-year-old Freddie Gray in 2015. He emphasized a social message to improve the conditions of minorities living in poor urban areas.

“Our mission for coming here to Paterson tonight is one reason, God said, ‘Go.’ We said, ‘We’re on our way,’” said Lewis.

Lewis presented before a crowd of dozens of high school football players who filled the council chambers.

Council members intently listened to the presentation. There was no discussion afterwards. Jackson, who is running for mayor next year, plans to lobby acting mayor Jane Williams-Warren.