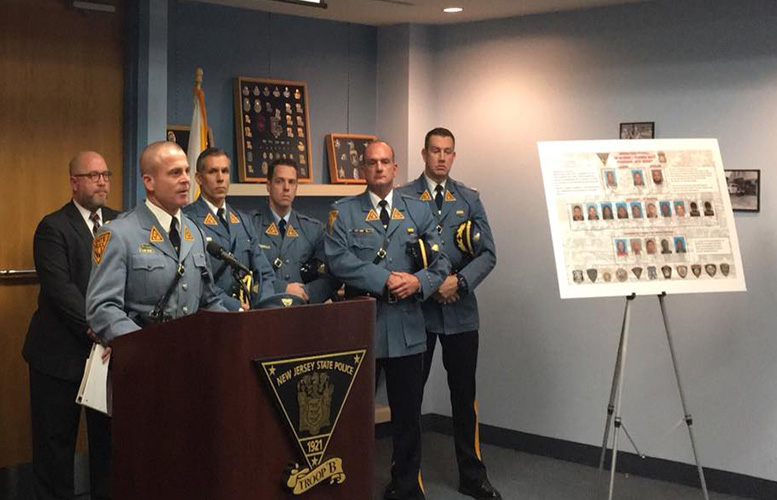 Forty-nine people were charged in a sting operation that targeted an affiliate of the Bloods street gang allegedly responsible for unloading large quantities of heroin on the streets of Paterson, New Jersey attorney general Christopher Porrino announced on Tuesday morning.

Authorities seized 18,000 bags of heroin worth $125,000 in the operation dubbed “Operation Pitfall” from the drug trafficking ring known as 4K Bloods/Korner Boyz. 5 bags of cocaine, 1 pound of marijuana, and 3 handguns were confiscated, authorities said.

Investigation into the four-year-old drug enterprise began in May, authorities said.

“Paterson is a major heroin distribution hub and these Bloods gang members allegedly were a big part of the problem,” Porrino said. “By taking out a major drug network like this one. We’re helping to make life safer and more secure for the residents of Paterson.”

The heroin ring operated out of the crime-ridden 4th Ward, authorities said. The group operated around four street corners on Rosa Parks Boulevard. It also operated from corners on Mercer Street and Putnam Street.

Marvelous Pitts, 31, of Paterson, and Jaumel Reese, 30, of Passaic City, led the ring. Authorities said the undercover operation was named after Pitts.

Pitts is serving time in state prison for an aggravated assault conviction. Reese is being held, authorities said.

Pitts and Reese were allegedly supplied by Jesse Garcia, 27, of Lodi. Authorities seized $20,000, 400 bags of heroin, and a handgun from Garcia on Saturday in Lodi.

11 of the 49 were employees of the ring and members of the street gang. Some of those arrested were buyers.

Authorities seized a number of weapons that the gang used to defend its territory.

“Gang violence and heroin are twin scourges that threaten the safety and quality of life of many Paterson residents, particularly those in the 4th Ward neighborhoods where these defendants operated,” Elie Honig, director of the Division of Criminal Justice, said. “Through Operation Pitfall, we took aim at both of these corrosive influences, taking down the alleged leader and other 4K gang members who ran this heroin network.”