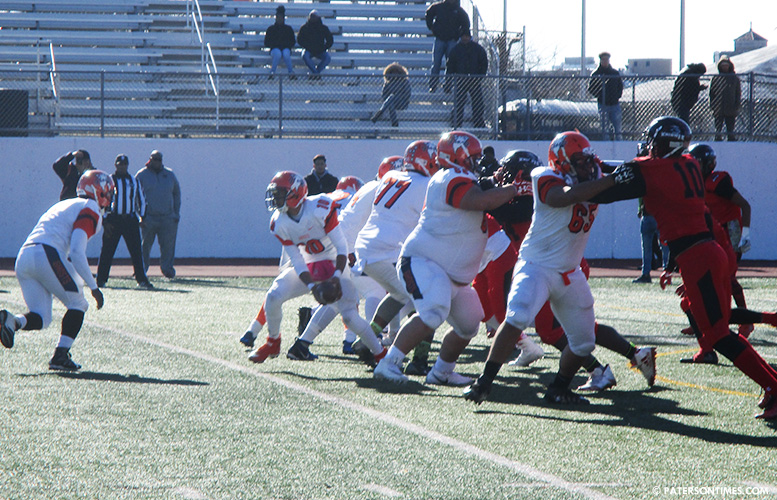 Under partly cloudy to clear skies, with temperatures hovering in the lower 40s, the Kennedy Knights won the toss and elected to receive. Kennedy immediately went to the air.  Junior signal caller Shaqir Herbert fired over the middle to senior tight end Diony Dilone for a 20-yard gain. With a 1st and ten from the shotgun, Herbert handed off to junior Calvin Clyburn who pin-balled for 15 more yards.

Continuing the no-huddle offense and keeping the Ghost defense off balance, senior Azmir Ivy bounced off left guard for 5 yards to continue the drive.  Following more successful JFK efforts, the senior running back delivered a one-yard TD and followed up with a 2-point conversion carry.

Poised to dominate the game, Knights enjoyed an early 8-0 lead.

Without the use of a tee, Kennedy kicked off. Eastside’s first play from scrimmage served notice as to what would be a huge day for running back Lamar Johnson.  The carry off left guard was the first of many for the 205 lb. 6’0” senior workhorse.  Johnson was a perpetual thorn in the flesh for Kennedy defenders the entire game.

A pitch right was stopped for scant yardage by Knights’ linebacker, Darien Davis.  A flair pass to the right flat was then almost picked off by Kennedy’s Herbert.  The following handoff produced no fruit, resulting in an Eastside punt.  The kick sailed high in the air, in time for Ghost defenders to race down field.  Under intense pressure, the Kennedy return man bobbled the catch, resulting in a wild scramble for the pigskin.  The recovery by the Ghosts gave them new life at the Knight’s 29-yard line.

With Eastside sophomore quarterback Mike Jackson in the shotgun, senior receiver, Jamiel Moss, was split wide right.  However two straight defensive plays by the Knights’ Davis stymied any possibility of a Ghost score.  The junior linebacker followed his tackle for no gain by chasing after a high snap that sailed over Jackson’s head.  The recovery gave JFK the ball on the Eastside 45 yard line.

Kennedy’s offensive series began as Ivy followed the blocking of junior left tackle Jaysen Triunfer but the gain was called back due to an illegal procedure penalty.  The same exact play followed with Ivy squeezing out several yards, despite stumbling.  Soon thereafter, with 1st and ten from the Eastside 37, junior Jayden Cornish contributed to the running game with a nice carry off left guard, junior Charlie Davila, for good yardage.  However, the Knight endeavor was weathered by a high snap that tethered Herbert.

The result was a sack by Eastside and loss of big yardage.  An incomplete long bomb down the right sideline forced a JFK punt.  The kick by Jayden Cornish took a Kennedy bounce and pinned Eastside deep in their own territory.

Ghosts’ Johnson took care of business by responding with a pounding run that gave Eastside breathing room.  Johnson followed by taking the next handoff straight up the middle.   Running into a brick wall of Kennedy defenders, the sturdy senior incredibly appeared out of the horde of bodies.  Encouraged by the roaring crowd, Johnson rumbled for a 40-yard gain.

Cheering fans then transitioned to silence as the Knights’ Clyburn lay motionless, near midfield.  However, after several minutes, the persevering junior was able to walk unaided to the sideline resulting in warm applause by fans from both sides.

Back to the Eastside drive, Johnson continued his punishing running behind junior left tackle, Hansone Green, freshman center Shamar Freeman, and seniors right guard Jayvon Urena and right tackle, Joswan Polanco.  Johnson then dotted the I, secured the handoff, and veered off a pancake block by Green for a first down.

QB Jackson then again pitched to Johnson.  However, rather than running, Johnson pulled up and fired a pass.  Unfortunately for the Ghosts, his intended receiver was smothered by the Knight defensive duo of senior Katrele Green and sophomore Andre Gardner.  Two more pitches to Johnson gave Eastside another first down.  Eastside Head Coach Tyrone Turner then opted to continue going with his money man.  Johnson carried time and time again for excellent yardage.  Following an Eastside pass that fell tantalizing short in the end zone, the Ghosts were faced with a 3rd and 5 on the JFK 13 yard line.

In what might be called the play of the game, Johnson again got the call.  This time he picked up a loose football on a busted play and was virtually swarmed by Kennedy defenders.  However, Johnson managed to shake loose, reverse field, and turn a sure, huge loss into a scintillating success.  The next handoff saw Johnson score by running toward the right sideline and crossing the goal line.

The subsequent extra point attempt failed, resulting in a score of 8-6, Kennedy, with 6:50 left in the first quarter.

In what might tie Johnson’s aforementioned run for play of the game, Kennedy quarterback Herbert rolled right after gathering in Clark’s hike from the shotgun.   Herbert narrowly escaped a convoy of Kennedy tacklers near the Eastside sideline.  The cool field leader then pulled up, turned, and tossed an across the field pass into the end zone to an awaiting Diony Dilone.  Finding himself all alone, the 6”4” 215 pounder had to literally wait, uncontested, for the descending rainbow.  The perfect catch of the perfect pass resulted in the second Kennedy touchdown.

The first half fireworks were far from over as tenacious defense, courtesy of JFK’s Dilone and Davis, forced another Ghost punt.  A spectacular reverse, run by Clyburn, found Kennedy again knocking at the score door.  However, excellent pass defense provided by Eastside’s junior linebacker Dwayne Hatton and senior defensive back Corey Powell Jr, squelched the rally.   Time ran out on the first half clock.

The second half saw both teams extend excellent effort, yet no points were garnered on the scoreboard.  Late in the third quarter the intensity escalated as tempers boiled.  However, the conflict was handled well by the quintet of referees.

Some came from far to witness the game. 60-year old Jessie Briggs made a trip from North Carolina to spend the holiday with family and friends. A must stop was the Thanksgiving game.

“I graduated in 1975 from Eastside. I played both linebacker and defensive back for the Ghosts all four years,” Briggs, clad in the trademark Ghost orange, said. “However, we lost every contest against them. I’ve had to live with that for my entire life.”

Briggs’s team has to live with another loss.