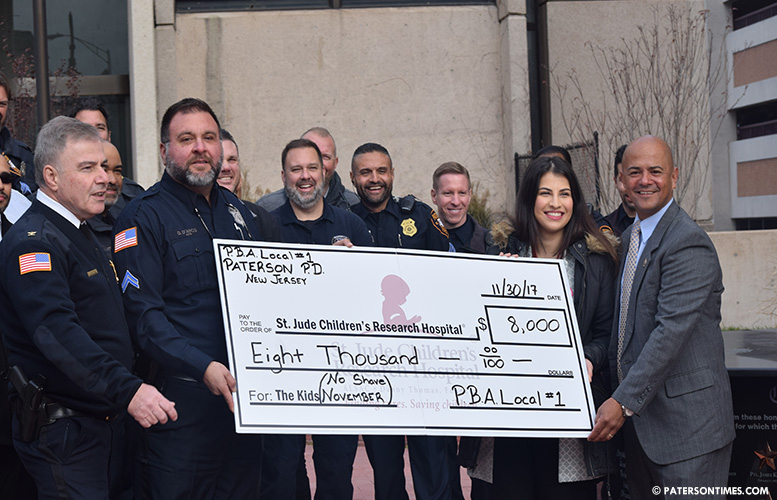 The city’s police officers raised $8,000 through their “No-Shave November” campaign to combat cancer. Each police officer donated $50 that would otherwise be spent on shaving and grooming.

Detective David D’Arco, a cancer survivor, led the campaign. He was diagnosed with cancer in 2012, he said.

“This is personal for me,” said D’Arco, a 19-year veteran. He and two dozen police officers handed a large check to the St. Jude Children’s Research Hospital in front of the Frank X. Graves Public Safety Complex on Thursday morning.

D’Arco conducted research prior to selecting St. Jude Children’s Research Hospital. One key factor he looked at was how much of the money will actually go towards research and treatment. He wanted to make sure the funds are spent on the cause rather than on salaries of high ranking officials at a given organization.

“The money goes straight to the kids. Every penny goes to the children,” said Fatima Hameed of the ALSAC which is the fundraising and awareness organization for St. Jude Children’s Research Hospital.

Hameed accepted the $8,000 check from the officers in a brief ceremony outside the police headquarters.

“We more than doubled what we raised last year,” said D’Arco. He said police officers raised $4,000 last year that was donated to the Lustgarten Foundation which conducts scientific and medical research to find treatment and cure for pancreatic cancer.

“The men and women of Paterson’s finest are compassionate and giving individuals who truly are dedicated to the welfare of the citizens,” said police director Jerry Speziale.