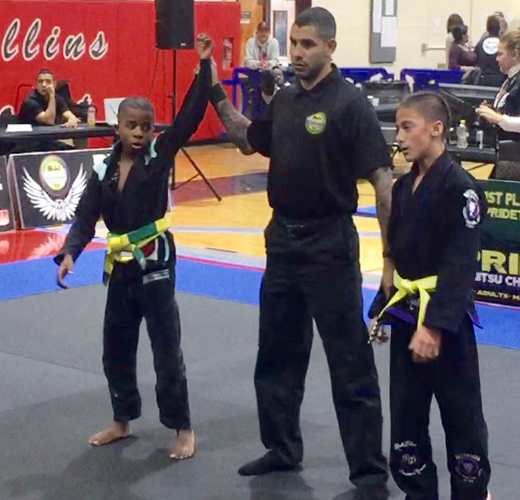 Hundreds of people from the Northeast descended on Paterson for the Pride Jiu Jitsu International Tournament at John F. Kennedy High School this month. This was the first time a Brazilian jiu-jitsu competition was hosted in the city.

At the home turf, the Paterson team from Unity Jiu Jitsu School of New Jersey dominated the competition. Naji Mitchell, father of the two Paterson jiu jitsu prodigies, said the team won 12 gold, 4 silver, and 1 bronze medals. The team won the most gold in the competition.

“We ended up beating some of the larger teams,” said Mitchell. His sons Jason Lambert Dixon Jr. and Jalen Malik Mitchell were among the 600 kids from throughout the tri-state to take part in the competition on Sunday, Dec. 10, 2017.

Both boys did well. Jalen moved up two age divisions to take gold, said the father. Another boy from Paterson Nathan Gonzalez won a gold medal. Their instructor, Devhonte Johnson, who is also from Paterson, secured the prize for first place academy.

The team from Unity Jiu Jitsu School of New Jersey that competed in the contest.

Johnson is the head instructor at the Totowa-based Unity Jiu Jitsu School of New Jersey. He has competed throughout the country and the world and is known as a top prospect in Brazilian Jiu Jitsu. Over the past two years, he has created a family environment at the academy and produced a training regimen that allows youngsters to have fun while improving their skills, said Mitchell.

“I hope they do,” said Mitchell. He said it builds awareness for the sport in Paterson. He said this would encourage more young people from the city to take part in jiu jitsu.

“We have a team here that is doing well. Maybe some more kids will do this as an alternative sport to nothing else to do,” said Mitchell.