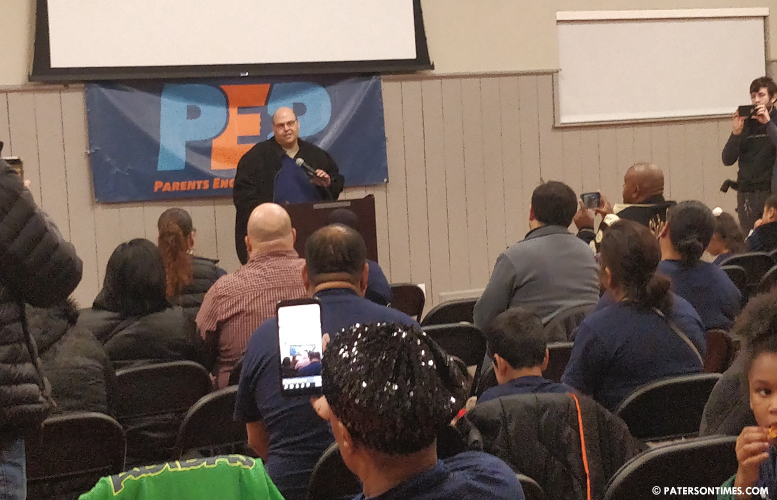 Almost a month after the city’s school board approved a symbolic resolution opposing the opening of any new charter schools in Paterson, a small band of parents from charter schools protested the moratorium on Wednesday evening.

Tomacinia Carter, whose two children attend the Community Charter School of Paterson, said the measure passed by the school board was an attack on school choice and charter parents. “I think they are attacking us,” she said. “I’m happy with my kids in charter schools.”

Carter was among 25 people to protest the anti-charter school measure at the Paterson Youth Center on Front Street. Some of the parents walked two blocks to John F. Kennedy High School to protest the measure in front of the school board.

Some parents, like Elizabeth Bantley-Holmes, came from Newark to join the protest.  ”Parents should have a choice of where they want to send their children. Every school is not a perfect fit for every child,” she said. “I happen to love charter schools.”

School board members have argued transfer of millions of dollars to charter schools is eroding quality of education for vast majority of Paterson students. The school district is expected to transfer $55 million in 2018-19 school year, up from $46 million this year. This has created budget shortfalls in the district leading to layoff of hundreds of employees.

“The resolution we voted on was not an attack on current charter schools it spoke directly to future charter schools.” said school board member Jonathan Hodges. He said charters schools serve a small number of students at the expense of the district’s almost 30,000 pupils. “It’s a detriment to their educational goals,” he said.

Bob Guarasci, founder of the Community Charter School of Paterson, sees the measure as a frontal attack on charters. “The moratorium is symbolic, what’s not symbolic, is the consternation of families who believe they are equal Paterson parents in this city and should not be looked down upon by the Board of Education,” he said. “We don’t want to tear down schools. We want to build schools up. I think it’s a mistake for the Board of Education to say we ought to have a moratorium on charter schools.”

Guarasci described the passage of the measure as a “vote of opportunity.” The measure was introduced by school board member Emanuel Capers.

The protesters were joined by councilman Andre Sayegh, a candidate running for mayor next year. “This is for all children. It’s unfair to pit parents against parents, children against children, our priority should be a quality education for all children irrespective of where they attend school,” he said.

Sayegh, who vowed to be an “education mayor,” would not directly say whether he favored charter schools. The city council has passed a resolution calling for a moratorium on charter schools in 2015.