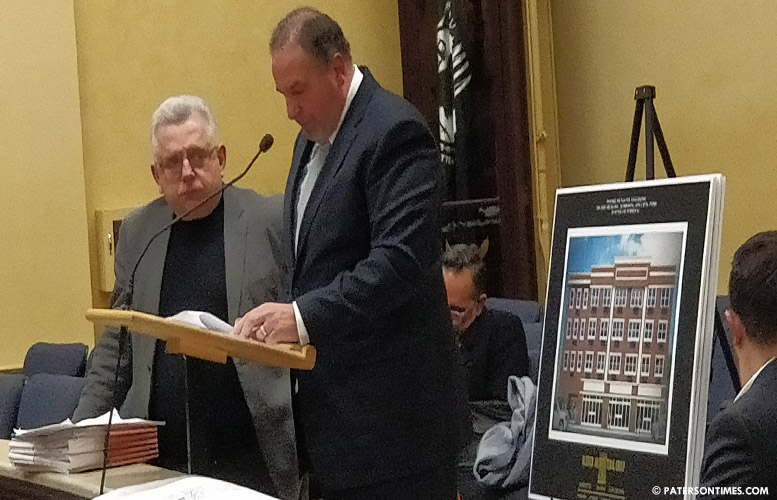 A Jersey City-based developer is constructing a four-story mixed-use building that will straddle Park and 16th Avenues in Paterson for $15 million. 63 apartments and 3 retail spaces so close to the Paterson Train Station is aimed at attracting millennials to the city.

Developer Scott Seale, co-owner of Novus Equities, said the apartments will cater to market-rate tenants. He said the development — which will have 9 studios, 27 one-bedrooms, and 27 two-bedroom apartments on floors 2-4 — will have underground parking for tenants.

The first floor will contain three retail spaces. One of those spaces will likely be occupied by a UPS store, according to the developer. A second space will be used by Elite Nails. Both have shown interest in operating from the Sandy Hill section.

“These are going to be beautiful apartments,” said Seale on Monday. He presented a swanky brick façade building that wowed some members of the Paterson Planning Board into describing the structure as “beautiful.”

“It’s the best blend of residential and commercial,” said Alan Mariconda, attorney for Novus Equities on the project.

One resident worried the apartment complex will take away neighborhood parking spaces and worsen traffic congestion in the area.

“We have a problem with parking,” said Olga Reyes, who owns a property on Park Avenue. She said even if underground parking is provided for residents there’s a chance those tenants could end up taking spaces on the street. “This is a very nice and ambitious project. I would love to see this on Madison and Ellison.”

Reyes did not oppose the project, but worried the apartment complex will take away parking from area residents.

“Parking is always going to be an issue,” said Janice Northrop, chairwoman of the Paterson Planning Board, which approved the project. The developer needs 76 parking spaces based on the size of the project, but had only 72 spaces.

48 spaces will be underground. 8 spaces on site at a curb cut. And 16 at a separate property on 16th Avenue.

The development will also have lighting that will better illuminate the area and surveillance cameras that will cover the immediate area around the building on both Park Avenue and 16th Avenue.

Luis Velez, 5th Ward councilman, wanted to know the number of cameras the developer will install and whether they will be tied to the police camera system.

Seale did not have an exact number. He said a consultant will determine the number based on coverage area.

“Is it fair to say there will be enough cameras to secure the perimeter and property?” asked Velez.

“Absolutely,” replied Seale. He is known for operating the apartment complex on Broadway and Rosa Parks Boulevard. His firm has been in Paterson since 2000. He received an award several years ago for preserving a historic building on Park Avenue.

Velez said this is the sort of project the 5th Ward needs. He said a project like this will improve quality of life for neighborhood residents while beautifying the area.

Just few blocks from Eastside High School, the project will pay homage to former principal Joe Clark, said Seale. He said once completed, the building will be known as the Joe Clark Apartments.

The project is expected for completion in late 2019.

Correction (Jan. 9, 2018): A previous version of this report erroneously stated the building site is East 16th Street, when in fact, it’s 16th Avenue.