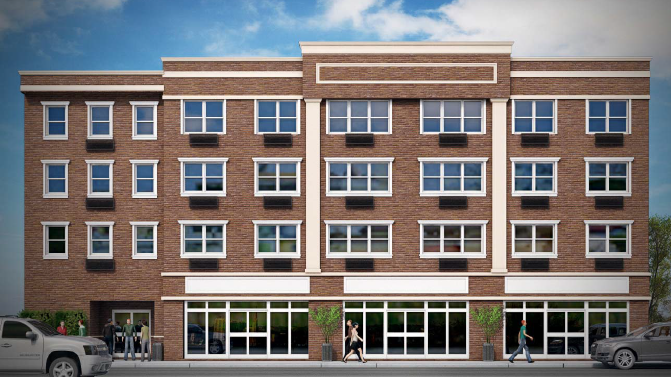 Developer Scott Seale, co-owner of Novus Equities of Jersey City, is naming the building in Clark’s honor to pay homage to Eastside High School. His proposed four-story mixed-use complex with 63 apartments and 3 retail spaces will be three blocks away from the high school where Clark made his name.

“I think it’s a good idea,” said community leader Alonzo “Al” Moody. “I think he deserves it. I was there at the school; I was working with a lot of kids at the time; they loved him.”

Moody was part of the Parent Home School Council and worked with Clark. His sons were attending Eastside High School at the time. He also worked with Clark in his capacity as director of the Youth Services Bureau. Many of the young people served by the bureau were students of the high school, he said.

“He made a vast impression,” said Moody. He said the students, who attended Eastside High School in the 1980s, still speak of Clark with great respect and reverence.

Clark demanded obedience through an autocratic approach. He was known for wielding a baseball bat and a bullhorn while patrolling the hallways of the Park Avenue high school.

Moody recalled Clark would come in at 4:30 in the morning. By 7:30 a.m., he was busy in the hallways. Clark’s work at Eastside High School was turned into a movie called “Lean on Me.” Clark was played by Morgan Freeman.

Clark’s exploits were covered in the national media. He received praise from president Ronald Reagan for his tough approach. He did not receive much praise from parents, whose kids he tossed out of the school (Clark threw out 300 students in his first year, 1982) or the school board, whose authority he undermined.

Moody took exception to the suggestion Clark’s impact on the school was ephemeral. Clark restored order at the school and had lasting impact on the students he did not throw out. In his book, Clark states, “bedlam reigned,” at Eastside High School prior to his arrival.

Clark had to deal with violence and drug dealing in the school. There were also low-test scores. Eastside High School continues to suffer from some of the same problems.

Clark’s hard-line approach irked the school board which drew up insubordination charges that were later dropped. He was ordered suspended in 1989 for allegedly arranging strippers to perform at a school assembly.

Clark could not be reached for comments for this story.

The building that will bear his name is expected for completion in late 2019.

“We’re hoping he’s going to come for our groundbreaking from Florida,” said Seale.