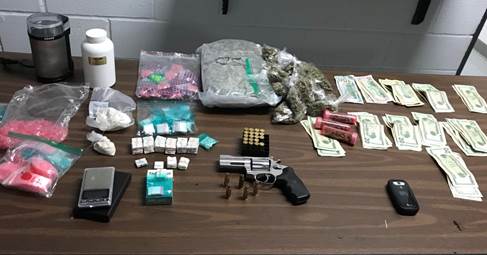 Detectives ran up a driveway on East 30th Street to apprehend an alleged city drug dealer with a laundry bag jam-packed with $12,000 worth of heroin, marijuana, and cocaine, according to Passaic County Sheriff Richard Berdnik.

Suarez was under surveillance following complaints of heavy drug dealing in the area of East 30th Street and 11th Avenue. At 9:40 p.m. on Tuesday, detectives observed Suarez arrive and sit in a GMC truck in front of 139 East 30th Street.

Authorities said Suarez remained in the vehicle for several minutes with engine idling. He then got out of the vehicle and walked up the driveway of 139 East 30th Street and opened the rear hatch door of a Chevy SUV to grab a laundry bag.

Detectives watched. He inspected the laundry bag, put it over his shoulder, and began to walk out of the driveway. Detectives exited their undercover vehicles, ran up the driveway, and placed him under arrest.

Authorities seized $1,182 in cash from Suarez. He was charged with numerous drug possession and distribution. Authorities also charged him with possession of firearm, hollow nose ammunition, and certain persons not to have a firearm.