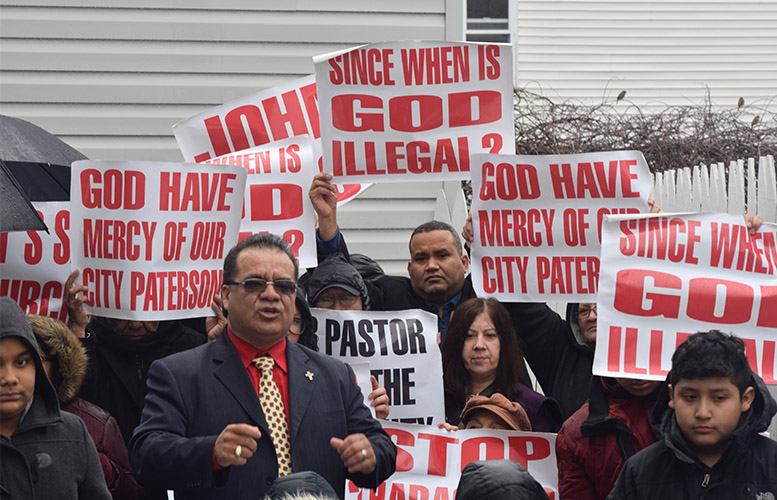 The pastor for the controversial church – a garage converted to a house of worship without zoning approval — on Atlantic Street led a protest against the city on Sunday morning. His congregation has been forced to worship outside, he said.

Pastor Jesus Sevilla (pictured with glasses) said a fire inspector told him on Friday of last week to cease operation pending approval from the Board of Adjustment.

“This is dirty politics,” said Sevilla surrounded by 35 church members. He criticized fire chief Brian McDermott and community improvement director David Gilmore. The fire department made him re-wire the entire garage and other improvements only to tell him to cease operation, he said.

Sevilla opened his church on residential Atlantic Street without seeking approval from the city. His neighbors oppose the church for creating parking problems and late-night noise. The pastor has acknowledged his mistake and is seeking permission to legitimize the church run out of a garage.

Sevilla’s application was scheduled for a hearing on Jan. 25. It has been postponed to Feb. 15, 2018. Mayor Jane Williams-Warren allowed him to operate the church during the holidays until Jan. 25. She issued a memorandum placing a moratorium on enforcement actions against the pastor.

Williams-Warren’s enforcement moratorium came after the attorney for the Board of Adjustment told Sevilla to cease operation during a hearing in late November. This hearing was adjourned and moved to Jan. 25 at the pastor’s request.

Municipal officials said the moratorium ended last week. Sevilla said he is “disappointed” in the mayor for allowing the fire department to order a shutdown.

Some of the pastor’s neighbors see the latest development as a positive sign.

“This should have happened long time ago. He received special treatment until the 25th,” said Karen Agosto, who lives on Atlantic Street. “Our rights as neighbors was taken away.”

Agosto and two dozen other neighbors have publicly opposed the church. Some of those neighbors have faced retaliation from the pastor. Sevilla has filed harassment charges against some of the neighbors.

The neighbors see the municipal court complaints as a way to silence their opposition. However, this has had the opposite effect. Agosto and others are more determined than ever to oppose the church after the pastor’s heavy-handed tactics.

Sevilla also tried to legitimize the church by leveraging his ties with councilmen Andre Sayegh and Luis Velez. Sayegh and Velez brought acting police chief Troy Oswald to the church for a community forum.

Both council members have said the gathering at the church had nothing to do with the ensuing controversy.

The pastor has had his church on Atlantic Street since 2009. His church has been praised for helping the needy in Paterson.

On Sunday, Linezze Mateo, 28, who has been with the church since its inception, shared how the pastor and the congregation transformed her life. She ran away from home and was involved on the street.

She became pregnant with her daughter. The child’s father was involved in a gang, she said. Her daughter is now 7-year-old.

“If it wasn’t for the church, I’d probably still be there. My mom would probably be raising my daughter. I probably would have been lost to drugs,” said Mateo. “Coming here. They helped restore me with the help of God. They helped me to be a better parent and citizen.”

The neighbors recognize the work the church has been doing. However, they would like peace and quiet in their homes. One neighbor told the Board of Adjustment in November the noise kept him from sleeping at night for his early morning shift. Others have found their driveways blocked by cars belonging to congregants.

“It’s not as bad as they say,” said Jose Rivera, who lives on the corner of Levine and Atlantic Streets, who was at the protest showing his support for the church.

The growing church has 70 congregants. Some have suggested the pastor should consider moving to a different location to accommodate his growing congregation and put the controversy to bed.

Sevilla has balked at the suggestion, but on Sunday said he was open to a possible move to a different location. He is hoping the city has a building that it is willing to sell to the church. The city is auctioning off almost three dozen properties in March.