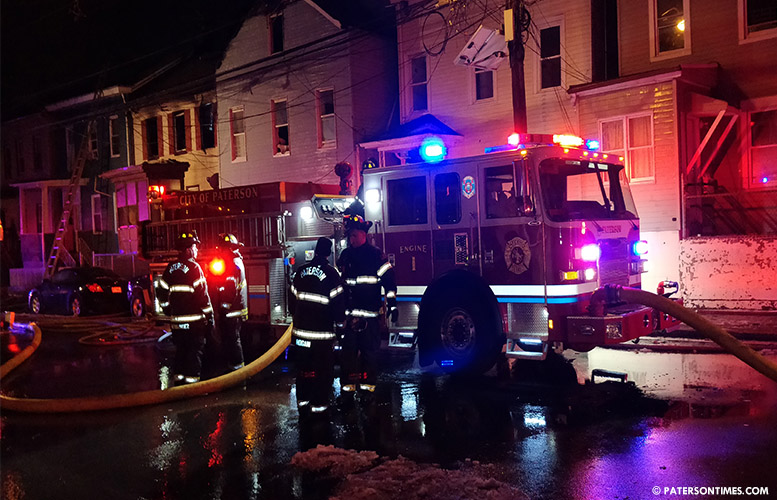 Three of the buildings were heavily damaged. And a fourth structure sustained minor damages, said the deputy fire chief.

The damage could have been far worse had it not been for two firefighters. Emergency medical technician (EMT) firefighters Marvin Cruz and Dane Kirwin called in the fire.

“They were returning from a call. They noticed the smoke. They called in the fire and in the process probably saved a couple of houses,” said Calamita.

60 firefighters responded to the blaze which quickly reached fourth alarm. A Clifton firefighter suffered a non-serious injury at the scene, said the deputy chief. There were no civilian injuries, he said.

Councilman Luis Velez said the fire started at a vacant house. Some of the displaced residents said the bottom floor of 518 Summer Street was being occupied by a squatter.

Velez, who represents the 5th Ward, where the fire occurred, left the city council special meeting to respond to the scene. He comforted the affected residents and ensured they were being assisted.

“I just saw flames reflected on a window and ran out,” said a man who lives at 514 Summer Street. He would not provide his name. “I’m just glad everybody got out.”

The fire also impacted other residents on the street. Firefighters had to shut off electricity to the block while battling the blaze, said fire chief Brian McDermott. “We had to put our aerial ladder over the high tension wires,” he said. Fire officials expect the restoration of electricity within hours.

“We’re still operating on some hotspots,” said Calamita little after 11 p.m. He said the fire is still not yet under control.

Fire officials do not expect to demolish the main fire building.