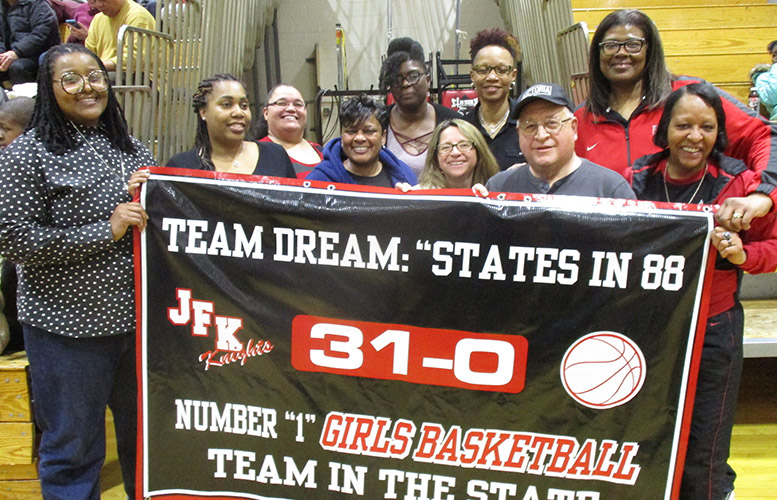 The year was 1988. The setting was Monmouth University. Thousands of fans packed the university’s basketball arena. The foe was the formidable, perennial state powerhouse Lancers of St. John Vianney High School. The noise was absolutely deafening.

Katina Johnson described the moment as beyond belief. “There was pandemonium,” she said. “The feeling was amazing. Fans came racing onto the court. People were leaping up and down. There were tears. There were hugs. It was like winning the Super Bowl. To think that urban kids accomplished what we did. To think that we could capture a state championship.  I don’t believe anyone in history will ever do this again.”

Johnson was a junior in 1988. She now resides in New York City. To say the game and the entire season that year was successful would be an understatement. The Lady Knights won by a score of 70-47. Their final record was 31-0.

That was the crowning achievement of the 1987-1988 John F. Kennedy High School girls’ basketball squad. Johnson played power forward/center for that year’s varsity that went undefeated.

Team members were honored at half time of Thursday night’s girls’ home game against Wayne Valley. A new banner honoring the team was unveiled.

In attendance was none other than Lou Bonora, head coach and craftsman during that once in a lifetime, magical year. “That was a wonderful season and a wonderful night,” said Bonora, 68, before tipoff of Thursday’s contest.

“At that time that was the only undefeated team in Passaic County history since 1902,” said Bonora.

Bonora, members of the 1988 championship squad, and current team players and coaching staff, were treated to a catered meal and celebration cake after the game.  Bonora presented JFK Athletic Director, Scott Durham, with a team trophy from 1988 for the school’s showcase.

“From that team there were so many success stories,” Bonora said. “A number of players went on to play at the collegiate level.  LaTonya Johnson scored nearly 2,000 points during her high school career.  She then went on to star for Rutgers University. Meticia Watson got a full ride scholarship to play for George Mason. We also had the amazing ‘Downtown Karen Brown’ who could score from anywhere on the floor. Katina Johnson became one of the all-time leading scorers at Ramapo College. Teya Eaton is now the head coach for Passaic Community College. The twin sisters, Felicia and Lakeysha Wright, went on to play at the next level in San Diego.”

Maria Agosto, a senior during the undefeated season, played guard.  She came off the bench to spark her teammates.

“Whenever Maria entered the game, everybody would stand up and start clapping,” coach Bonora said.

Now a patient account representative at St. Joseph’s Regional Medical Center, Maria commented on the impact of her 3-year high school career. “Coach Bonora taught me everything. I couldn’t hit the broadside of a barn when I first joined the team. Coach was the perfect example. He instilled discipline when we needed it.  He was a role model of the highest order,” she said.

After her JFK years, Sara Jocome attended the College of St. Elizabeth, in Morristown, where she competed in swimming. She is now an assistant for the Aquatic Department of the Randolph YMCA. Sara played guard and was a sophomore in 1988.

“Coach Bonora taught us how to play as a team and to respect each other,” Jocome recalled.  “We learned even more important lessons about life.” She passed on her love of the game to her son. 16-year-old Alex Mabb, is a sophomore at the Sussex Vocational School, also plays basketball.

Lattie (Meticia) Watson started as a sophomore for the Lady Knights that night so long ago.  In her first starting assignment that year, she poured in 28 points.  As a senior in 1990, Lattie would go on to be named MVP at the prestigious high school Tournament of Champions, played at Rutgers.  That season (also led by coach Bonora), Kennedy travelled to play several out of state games, including a contest in Troy, New York.  Lattie and her teammates defeated August Martin High School in the Bronx by a whopping 25 points.

Watson accepted a full-ride athletic scholarship to play at George Mason University upon graduation. She started halfway through her sophomore year and also was a starter as a junior and senior at the Fairfax, Virginia school. Now Dean of Students for the Class of 2021 at Teaneck High School, Watson is working on a doctorate from Northeastern University. She is a proud graduate of Rosa Parks School of the Performing Arts where she majored in theater.  Watson also served as head coach for two years for her high school alma mater, preceding longtime Lady Knights head coach, MarQuette Burgess.

LaVerne Robinson was a junior guard for the undefeated JFK team.

“We played mostly man to man defense that season,” Robinson said. “We also did a lot of full court pressing and played an occasional zone.”

Robinson said she had played in front of large crowds before, but not like the 1988 standing room only one in West Long Branch. “I was a little nervous. There was a huge number of fans from Paterson that night that came to cheer us on,” she said.

Robinson said she and her teammates “were like sisters.”

“Coming here this evening has been a great reunion,” said Robinson. “After high school we all went our different ways.  It’s great to be back tonight and see everyone.”

In attendance was also Jean Jennings, a 1978 Kennedy graduate, who calls herself the “#1 fan for the Lady Knights.” From 1974 to 1978, she would take the girls to parks in Paterson – Eastside, Pennington, and Buckley – to teach and drill them on rebounding, dribbling, and defense, she said.

Jennings was awarded a championship letter jacket at the conclusion of the 1988 season for her service.  She still faithfully attends Kennedy basketball contests.

As a center in 1988, Ronessa Allen Johnson came off the bench for JFK as a defensive specialist.  Today she owns her own beauty salon, A Strategic Plan, on Haledon Avenue, in Paterson.

“My job was to make sure the other team didn’t score,” Johnson said.

Johnson had a hard time recalling any close games that year.

“Coach Bonora was a master teacher,” Johnson said.  “If we missed something in a game, he would follow up with us.  The next game that problem would be resolved.”

LaTonya Johnson is well known in North Jersey high school sports. She has served as assistant to coach Burgess, at JFK, for six years. A senior in 1988, Johnson went on to star for Rutgers University on the hardwood. She started at center as a sophomore, junior, and senior, for coach Theresa Grentz, before the Vivian Stringer era.  She also went on to play professionally in Australia and Budapest, Hungary.

Johnson’s daughter, Jimmirah Johson, is now a junior and starts at center for the Lady Knights. “It was such a special time,” Johnson reminisced.  “After winning the championship we were given rings, jackets, and individual trophies.  I still have my trophy.”

Johnson said that as a coach she tries to instill life lessons, both on and off the court, for her young prodigies.

“I try to give the girls my experience in basketball and how I played,” Johnson stated.  “I always listened to my coaches. I try to mentor the girls outside of basketball and in life, as well.”

In Thursday night’s contest, Kennedy upended Wayne Valley by a score of 45-36.

The Lady Knights were led by Taniesha Gilbert with 19 points. Jimmirah Johnson was second in the scoring parade, with 12 tallies. Kiana Hardison added 10 points. Taylor Yancey and Destani Smith both chipped in with 2 scores apiece.

The Kennedy girls play at home on Saturday, February 10, at 12:00 p.m. against Eastern Christian in the Passaic County Tournament.