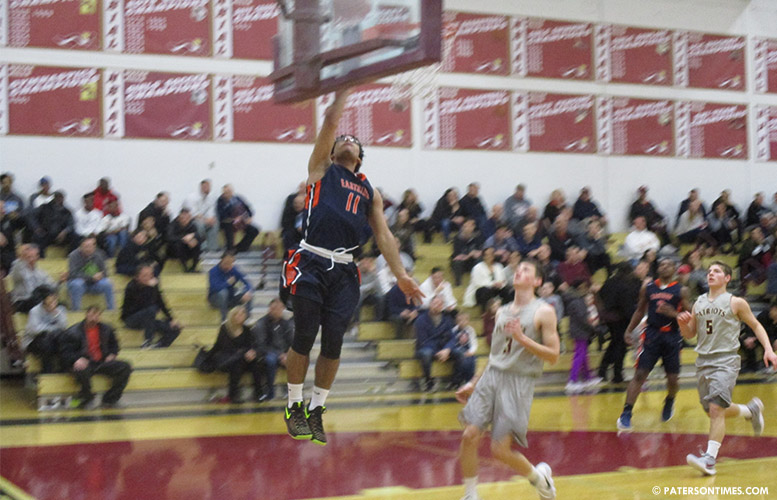 Wayne Hills wasted no time getting on the scoreboard with a pair of quick two-pointers. Junior guard Jake Belli notched a runner in the lane off the glass. Following a Patriot defensive rebound, senior guard Justin Wills was left all alone in the right corner for a long 3-pointer.

After an Eastside air ball that bounced out of bounds, the subsequent inbounds pass saw Belli scoot up court. Belli then fired the ball to his older sibling (senior Joey Belli), who found teammate Jason Modak in the low post. The Patriot senior center hit a banker off the glass. Soon thereafter, Belli (Jake) dribbled from the right wing, through the lane, and dished to Wills on the perimeter who calmly sank a long bomb.

The Patriot scoring surge, however, did not go unanswered. Eastside highlights included the guard tandem of senior Lamar Johnson and junior Gody Jeannys combining for a steal. From the point, Johnson passed to senior Demonte Johnson for a shot in the lane. Although the ball curled off the rim, Ghost senior Jahmiek Williams rebounded the miss and scored. In a spectacular finish of the first quarter, a last second Wayne Hills shot attempt was foiled by Eastside’s Jeannys. The senior speedster picked off an errant Patriot pass and went coast to coast for a buzzer beating layup.

Wayne Hills continued to be successful on offense by driving into the lane for kick-outs to shooters waiting beyond the three-point line. Especially effective for the evening in doing so was big brother, Joey Belli.  Also turning in a fine performance of both scoring and rebounding was Patriot Patrick Gilmore.  Usually working under the boards, Gilmore once found himself all alone near the top of the key.  Seemingly reluctant to shoot, nevertheless his 3-point attempt hit pay dirt.

Not to be outdone, toward the end of the first half, Eastside’s D. Johnson converted a spectacular fast break convoy, courtesy of a brilliant assist from Jeannys.  Soon thereafter, Jeannys picked a pocket for a coast to coast conversion.  Both squads offered shot attempts to conclude the second quarter but neither yielded fruit.

However, Wayne Hills’ Modak grabbed a defensive rebound.  His outlet pass and the connecting assist resulted in a cherry-pick score by Patriot senior forward, Joe Cerone.

Wayne Hills fans will certainly miss Modak who was granted a full ride athletic scholarship to play football for College of the Holy Cross.  However, opposing teams will not as he and Patriot teammates Justin Wills and Belli (Joey) have started since they were sophomores.

Despite being behind the eight ball in the second half, Eastside continued to turn up the intensity.  L. Johnson combined with Ortiz for a spectacular, successful fast break bucket. Ortiz then returned the favor, and fired a perfect, full court bullet to Johnson who converted.

Following several furious exchanges which were highlighted (or rather, lowlighted) by turnovers by both teams, the Patriots’ Gilmore cashed in from underneath.  The Ghosts’ Williams countered with a defensive rebound which ultimately resulted in a tidy score by Saldivar.  Eastside then cashed in on an improbable banker from well beyond the top of the key.  However, Wayne Hills replied with a spectacular drive by J. Belli to the basket for two.

Toward the end of the fourth quarter the Eastside defense forced a travelling violation.  However, enjoying a comfortable lead, the Patriots played keep away. The strategy proved successful, leading to several easy scores.

Eastside continued to extend every effort.   A beautiful, running Ghost 15-footer was nullified by a travelling violation.  Senior Ghost Shane Blathers added a nice put back off the glass for two.

A long 3-pointer concluded the Eastside scoring.  However, it was too little too late as Wayne Hills benefited from their home court advantage and will continue on in Passaic County Tournament play.  The final score tallied:  Wayne Hills 66 and Eastside 41. Also turning in a fine effort in a reserve role for the Patriots was forward Pulast Thacker.