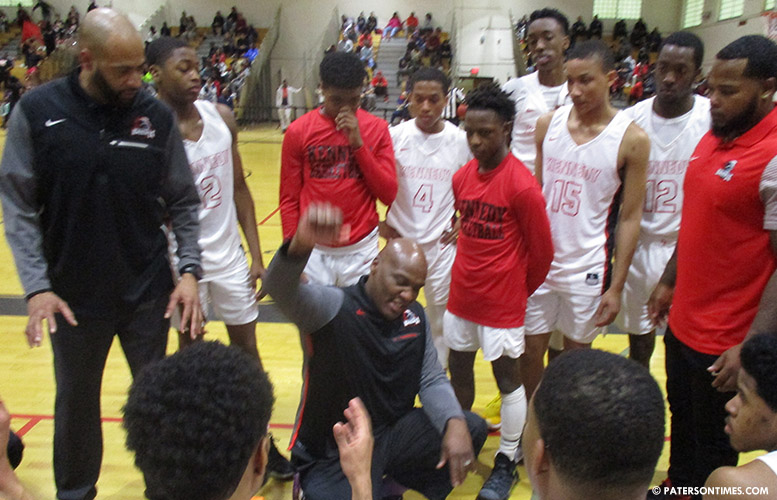 The John F. Kennedy varsity basketball team pulled out a scintillating victory over their visiting rival the Passaic Indians on Saturday afternoon.

Kennedy Knights won 65-50 in the quarterfinal battle of the Passaic County Tournament.

Kennedy senior Jaylen Colon opened the contest with a steal, but the theft was to no avail. Both teams featured cold shooting for most of the first quarter.

After myriad of missed attempts by both squads, Kennedy sophomore guard, Deishon Harrison, managed to avoid a rejection effort by Passaic’s Rodney Estevez.

The result was a trip to the charity stripe and two successful free throws.

JFK senior, Elijah Thomas, was also fouled while shooting but misfired on both freebies.  Indian sophomore Colby Sylvester, likewise, was fouled while doing the same. The junior guard sank his two free throw attempts. With 5:09 left, Kennedy held a 4-2 lead in the foul-plagued first frame.

The Knights then took advantage of inside size. Colon found JFK center, Jalen Hargrove, inside, for a possible two. The latter showed amazing agility for a big man throughout the entire contest.  However, both of his subsequent foul shots clanged off the rim.

After Kennedy was called for stepping on the line underneath their own basket, JFK’s Harrison turned in an excellent box out of a much taller Indian player for a defensive rebound.  Harrison then headed up court and fired to Colon who was near the top of the key.  Colon’s pass went back to Harrison and then to Hargrove, again, in the paint.  Fouled while shooting, this time the sophomore hit nothing but net on both charity offerings.

Following a Knight air ball, Passaic’s Sylvester came tantalizingly close to scoring on an amazing, reverse lay-up move and shot.  Passaic’s center, Estevez, then beat Hargrove for a rebound but the Indians could not capitalize.  However, soon thereafter, Passaic’s Antrell Monroe went coast to coast for a fast break.  Fouled in the act, the freshman sensation cashed in on one of two foul shots.

Kennedy was then called for an elbow underneath the boards.  Following was a furious exchange which finally concluded with a nice left-handed lay-up, by Estevez, off the glass.  After entry into the contest and defensive spark provided by Paterson junior, Avant’e Gilbert, teammate Colon stepped up to the plate, twice, first with a long 3-pointer from beyond the top of the key.  The senior leader then followed with a pick-pocket and successful fast break lay-up.  The short scoring surge by both squads resulted in a 14-8 Kennedy lead at the conclusion of the first frame.

The second quarter was inaugurated by a nifty assist from Harrison to Hargrove who turned a nice spin move from the low post into a score.  Passaic’s Monroe countered with two free throws.  Following Kennedy junior Germir Robinson’s entrance into the game, Indian senior Wagner Martinez picked up a loose ball.  The pass that followed was gathered in by Passaic’s Kyle Rios. The high-flying junior raced to the bucket and finished with a tomahawk dunk that brought the capacity crowd to its feet. As if that play were not spectacular enough, a few moments later, the challenge of the afternoon took place.

Challenge of the afternoon

Rios was again on the move. Heading at full steam toward his own basket he was countered by Kennedy’s Gilbert. Runaway freight train met unmovable object. Two skyscrapers collided head on. The spectacular, freeze frame moment resulted in Gilbert being whistled for a foul. Rios, amazingly, recovered to make one of two free throw efforts.

After the dust settled, Passaic had narrowed the score to 19-17 with three minutes left in the first half. Monroe lofted a successful 3-point rainbow from the left wing. The Passaic momentum continued as the scrappy Martinez snatched a defensive rebound.  The result was an easy, cherry-pick layup behind Kennedy’s defense for Indian senior, Wander Castilla. However, Kennedy’s Harrison quelled the rally with a sensational runner in the lane.  Yet, Martinez answered with his own 10-footer off the glass for the Indians.

A late whistle on an attempted block by Harrison on Martinez brought the ire of Paterson fans. Down by two points, 25-23, with 10 seconds left in the half, Harrison was fouled.  The smooth-as-silk sophomore calmly sank both free throws. A desperate fast break attempt by the Indians at the buzzer fell short resulting in the half time score knotted at 25-25.

Paterson’s Gilbert opened the second half with an electrifying fast break lay-up.  However, Passaic’s Monroe countered with a left baseline drive and successful jumper in which he altered his shot in mid-air. Monroe followed with another score, this one a 15-foot jump shot. Rios dished to Castilla for more Indian points from underneath.

In what could arguably be called the turning point of the game, Kennedy’s Zhimiar Canty caught fire. The seasoned senior first lofted a 3-pointer from the left wing which hit nothing but net.  Shortly thereafter, Harrison rushed up court, stopped on a dime at the free throw line and dished to Canty, all alone, on the left wing.  Paterson fans roared with approval even before the ball left the sharpshooting senior’s hands.  The calm, textbook technique served as Canty’s second straight successful three-pointer.  Moments later, Canty launched yet another bomb, this one from deep in the left corner, for the trifecta.  The heart throbbing turns of events saw the score elevate to Kennedy 49 and Passaic 40.

The Indians did not give up. Monroe raced down the court, was fouled while shooting, and cashed in both free throws.  However, Paterson’s Jah-Mahli Carnegie answered with a fast break score.

Kennedy’s lead stood the test of Passaic’s stalwart, fourth quarter comeback attempt. A highlight was a nice off-the-glass jumper by Harrison. Frosting on the cake was provided by Sylvester with an uncontested layup. For the Indians, in particular, senior forward Martinez exemplified his teammates’ efforts by scrapping for rebounds until the final buzzer sounded.

The squad left standing at the very end was Kennedy. The final score read:  Kennedy 65 and Passaic 50. The hard fought and well-deserved victory over the never-say-die Indians, indeed, should help propel the Knights to greater heights in the continuing county classic.