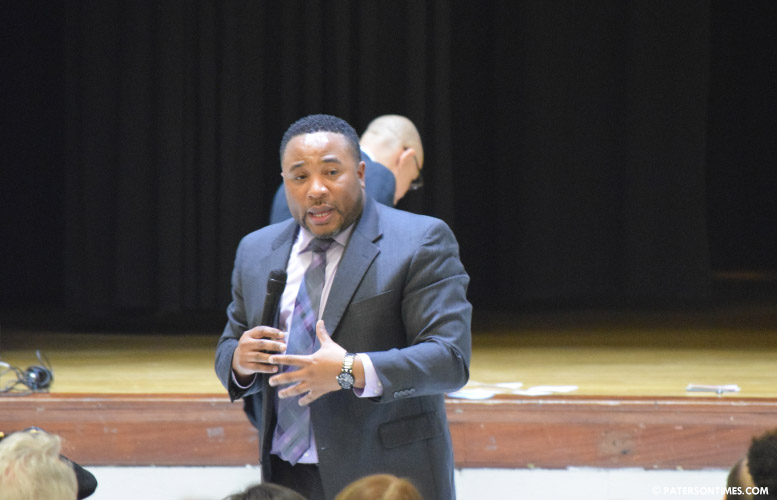 The three finalists — Devon Horton, Richard O’Malley, and Eileen Shafer — in the city’s search to find a schools superintendent made their case for the district’s top job at a community forum on Tuesday night.

Horton, O’Malley, and Shafer each were given an hour to make their pitch for the $230,000 job. Each shared their experience, plans for the district of 28,000 students with $550 million budget, and answered questions from the 130 people in attendance inside the John F. Kennedy High School auditorium.

The forum began with the first finalist, Horton, a deputy superintendent at the East St. Louis, Ill. school district, who sold himself as a miracle worker. He highlighted his work that led to 97-percent of graduating East St. Louis students being accepted into trade schools, military academies, and colleges. He required students to apply to five colleges and do three community service projects.

Last year, students in his district secured $14 million in scholarships, he said. He promised to do something similar in Paterson.

Horton identified the $75 million budget shortfall and shortcomings in the special education program as the district’s biggest challenges. When asked why he’d want to lead the Paterson school district, he replied: “I want the challenge.”

In his first 100 days, Horton said would conduct a series of audits focused on finance, facilities, and curriculum. He would also put in place a “Freshman On-Track” program to monitor the progress of freshmen students until graduation.

Horton also wants a “half-cap” ceremony for sophomores to encourage students to stay the course to graduation.

Horton shared his biography to strike a chord with the audience which was made up of district employees, community leaders, parents, students, and advocates. He was raised in a housing project in the Southside of Chicago by a single mother, who put him on track to graduate college. He has a bachelor’s of science in elementary education from Jackson State University and a master’s in educational leadership from Chicago State University. He taught in the Chicago Public Schools for 14 years before taking up the East St. Louis job.

Horton said he raised student test scores at a school in the violent “Terror Town” neighborhood in Chicago.

“I understand what it takes to get it done in the classroom,” said Horton. He also told the audience, he would organize a parent committee that will meet every month.

At the end of his presentation, Horton asked the audience to stand, put their arms out, and utter, “Miracles happen in Paterson.”

The second finalist, O’Malley, who has been the superintendent of the Edison public school district for the past nine years, said the district’s parents and students deserve better.

“I’d be fired if what’s happening here was happening in my district,” said O’Malley speaking of the district’s special education failures. “You should expect more. You should demand more.”

“I’ve always walked into districts that were ugly,” said O’Malley as walked in and out of aisles with ease to directly speak to the audience. “I spent my career cleaning up other people’s messes.”

O’Malley said every student, from pre-k-12, has a device in his district. He said the key is to build the technology infrastructure before purchasing devices.

His district parked a Wi-Fi bus in a neighborhood with trailer parks to ensure poor students have internet access to do homework, he said. He also partnered with Lightpath to let students without home internet connect to the web.

O’Malley is the superintendent of New Jersey’s sixth largest school district. When asked if he has experience working in an urban district, he said he did not. While working in Edison, O’Malley has been able to hire some of the city’s well-trained teachers laid off in the past years.

“You’re bleeding good talent. I’ve taken them,” said O’Malley. He said the district has a good training program for its teachers.

O’Malley said he recognized the odds were against him. “I know what I’m up against. I read the articles: the process is rigged, they’ve already picked the person,” he said. “It wasn’t easy for me to show up tonight knowing all of that. That should send a message to you. I’ll fight every day for your kids and show them no matter how high those obstacles are you still can prevail because good always beats evil.”

The third finalist, Shafer, who has worked for the school district for the past 25 years, was greeted with sustained applause and cheers by the audience. Majority of those in attendance were district employees.

“Look no further with the search. I’m the woman,” said Shafer, who has been serving as acting superintendent since last September. “I’m the superintendent that cares about our children. I care about our teachers.”

Shafer stressed her bond to the community. “This isn’t a job for me. This is a calling. I’ve seen superintendents come from out of this district and they do not have the Paterson connection. I have that Paterson connection.” She created a 127-page plan from concerns residents raised at her community meetings late last year.

Shafer plans to stick to the special education plan that will make whole students who went without speech therapy sessions by the end of the school year. She also promised one-to-one (O’Malley and Horton promised the same) devices for students and has a plan to ensure students without home internet have access to do homework. She also promised to create a center for after-school suspension to keep young people off the streets.

Shafer and O’Malley both said they would strike an agreement with the teachers’ union within 100 days.

“I was really impressed by Ms. Shafer’s ability to connect with people,” said John McEntee, Jr., president of the teachers’ union, speaking of Shafer’s speech. “I saw a different energy from her tonight. I was pleased.”

“I think she brung [sic] it home,” said former school board member Corey Teague of Shafer’s presentation. He also thought O’Malley remark focused on special education was a devastating attack against Shafer.

Teague has criticized the process as “rigged” and “unfair.”

The public was not provided resumes of the three candidates.

89 people submitted applications for the job. A search committee narrowed the candidates to 10, 6, and 3, according to school board member Manny Martinez.

The school board will vote to pick one of the three candidates at a special meeting on Wednesday night.