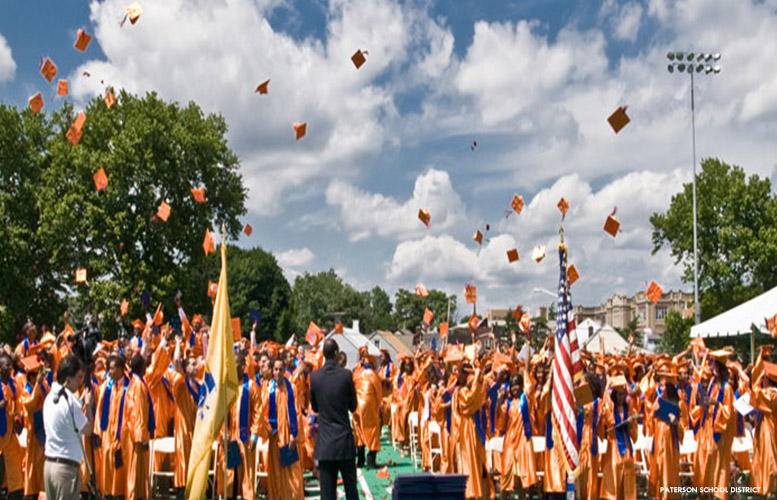 The city’s school district registered a remarkable — 87.79-percent – high school graduation rate in the 2016-17 school year, according to data released by the New Jersey Department of Education on Friday.

Superintendent Eileen Shafer touted the district’s ever-increasing graduation rate earlier in the week at a community forum. She pointed out nine years ago less than half of the city’s high school students graduated.

The graduation rate in 2009 was 45-percent. Through the use of credit recovery, better teacher training, smaller high schools the district steadily increased the rate.

The latest graduation rate is 10 points higher than the previous 78-percent.

“It happened with students doing better and taking school more seriously,” said Shafer at the community forum. “We will continue to work on our graduation rate.”

High schools throughout New Jersey made gains in graduation rates. State’s graduation rate reached a high of 90.5-percent, slightly higher than the previous 90.1. Biggest gains were made by minority (Hispanics and blacks), low-income, English language learners, and special education students suggesting a narrowing of the achievement gap.

“I’d like to congratulate the students, educators, school leaders, community members and families for such steady increases in high school graduation rates, as such efforts require perseverance, academic excellence and a strong focus on the needs of the whole child, particularly those most at risk,” said acting education commissioner Lamont Repollet in a statement. “These increases in high school graduation rates are exciting, as they demonstrate we are on a path toward closing our achievement gaps and achieving excellent and equitable educational opportunities for our children.”

Correction: A previous version of this report erroneously stated the graduation rate covered 2017-18 school year, when in fact, the rate is for 2016-17 academic year.