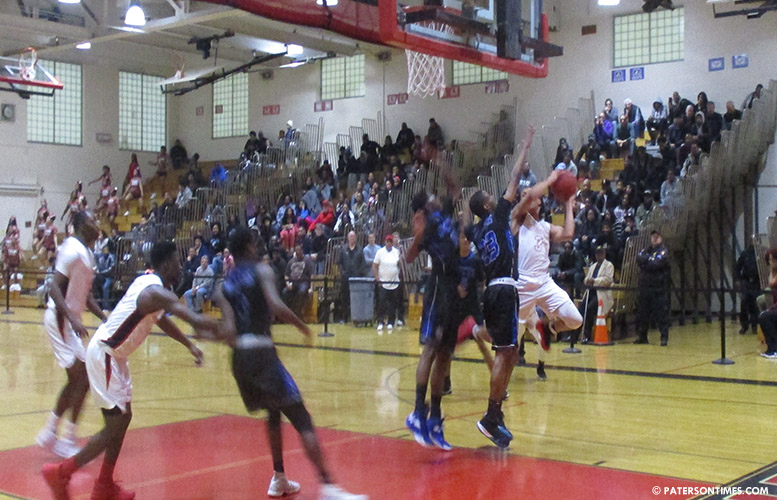 The game was marked by scintillating streaks by both squads. Kennedy enjoyed a twelve-point advantage, 36-24, at halftime. However, trailing the entire third quarter, the determined Bulldogs turned up the thermostat by scoring 9 unanswered points, in only 59 seconds, to start the final frame and narrow the score.

With the Knights’ towering Avante’ Gilbert at center, Kennedy easily controlled the opening tip but quickly threw the ball out of bounds. However, Passaic Tech immediately returned the favor with a travelling violation. The Knight defense then harassed Tech senior forward, Anthony Smith Jr., into throwing up a wild shot that missed. The Knights were unable to capitalize on the miscue.

Game scoring finally began to materialize with a coast-to-coast drive by Gilbert who was fouled in the act of shooting. The Knights’ junior center converted both free throws. The score stood, JFK 4-PCTI 0, with 5:57 left in the first frame.

Gilbert was soon in the spotlight again. Kennedy’s Joshual White grabbed a defensive rebound.  The outlet pass went to Gilbert who charged the length of the court but missed the fast break layup.  However, in a spectacular turn of events, Gilbert snatched the rebound and shot again, just before hitting the floor while falling backwards.  At the charity stripe, this time, 1 of 2 freebies were converted.

In a fierce front court battle that would extend the entire contest, the Bulldogs’ junior point guard, Toknawa Thomas, brought the ball up-court against Kennedy senior Jamir Lattimore.  Tech’s Nile Wade wheeled in the paint for a hook but his attempt was rejected by Gilbert.  The block resulted in an ensuing 20-foot jumper from the left baseline by Lattimore.

Down 8-0, Passaic Tech broke the scoring ice with a nice, left-handed running floater from the left of the free throw line.  The Knights were quick to answer.  Lattimore’s deposit in heavy traffic bounced off the rim but Gilbert was there to pick up the loose change.

Lattimore was fouled several times while driving or attempting short shots around the paint.  His parade to the free throw line was interspersed by a two Tech scores — a successful drive through the lane and shot by senior Mejiah Johnson and a steal by Smith Jr.

Colon proved to be Kennedy’s go-to-guy

Following Kennedy senior Shadir Franklin entrance into the contest, JFK’s senior guard, Jaylen Colon, dished off to junior Gemir Robinson, deep in the left corner, for a nothing but net 3-point rainbow. Colon proved to be Kennedy’s go-to-guy for the entire game. Whether running the offense, driving to the hoops for lay-ups, or dribbling to evade defenders, the senior leader virtually controlled the tempo of the game at times.

The Knights then clamped on a full court press which frustrated the Bulldogs. Even when PCTI managed to get the ball up court their offense was often in disarray. However, the PCTI temporary woes were halted when Smith Jr. was fouled in the act and cashed in both free throws.  The Bulldogs also were bolstered when junior Charles Ferrer, Jr. entered the contest.  Ferrer immediately made an impact by intimidating a Kennedy shot attempt.

Ferrer Jr. converted from inside to start the second frame.  However, Kennedy’s Colon answered by knocking down a difficult 15-foot jumper from the right baseline, the angle of which was behind the backboard.  After Kennedy’s Jaylen Hargrove’s baby hook curled off the rim, Colon pin-balled through the lane from left of the key.  The steady JFK senior was fouled in the act and dropped in both attempts from the charity stripe.  PCTI’s Combs was also fouled while driving to the hoop. His first two free throws bounced off the rim but the Knights were called for a lane violation. Combs swished his bonus, third attempt.

JFK’s Gilbert and Tech junior, Arnett Titus, then jostled at the low, left post. Gilbert was whistled for an illegal block. However, Kennedy’s Lattimore followed by contributing two free throws. Titus responded with a banker off the glass for Tech, courtesy of a nice dump-off assist.  Lattimore replied for JFK with a spectacular driving layup, despite noticeable defensive contact. No foul was called to the dismay of Kennedy fans.

A technical foul was then called on Passaic Tech. Kennedy’s White sank both free throws.  As intensity mounted, a series of furious up-and-down the court trips by both squads yielded no fruit. Finally, Tech’s Ferrer Jr. was fouled while dribbling and sank both free throw attempts.  Kennedy sophomore Deishon Harrison countered by zig-zagging through the lane and scoring.  PCTI’s Titus then alertly notched a put-back of a Bulldog air ball which had caromed off the glass.

A series of wild exchanges, loose balls, and frenetic action ensued.  When the dust cleared, the capacity crowd roared as Tech’s Wade knocked down a 3-pointer from the stratosphere, at least 10 feet beyond the top of the key. As the second quarter clock wound down, Kennedy’s Harrision converted two free throws. A last second shot attempt by Tech fell short.

In the third quarter the Knights turned to dependable senior, Zhimar Cantey. His successful long bomb from the left corner was followed by an intense skirmish from which JFK’s Lattimore eventually extricated for a score underneath. However, Tech, led by Smith Jr., refused to give up.  Fouled in the act, the smooth-as-silk senior not only made the shot but converted the following free throw. After Kennedy’s Thomas made one of two from the line, Tech’s Smith Jr. again drove into the paint. This time, the result was a pull-up jumper for two.  The Knights’ Harrison was then fouled while shooting and responded with a pair of successful free throws. Kennedy’s Cantey’s swatting away of an inbounds Bulldogs’ pass and a jump ball concluded the third quarter.

If anyone thought that Kennedy’s 12-point lead would soon evolve into a blowout, they were wrong. Tech came roaring back to edge within 4 points of the Knights. If those scores weren’t enough, PCTI’s Combs also forced a jump ball by tying up Kennedy’s Colon from behind.  In addition, following a Bulldog score by Smith Jr., Kennedy’s Harrison was tagged for an offensive foul on Tech senior, Michael Bolivar.

Knights were ahead only by six points, 49-43, the home court heroes were able to recover and hold the Bulldogs at bay.  The rest of the contest was marked by ball control by Kennedy.  However, the final minutes were not without highlights from Tech.  Led by Smith Jr., the Bulldogs continued to nip at the Knights’ heels by implementing their own full court press which temporarily rattled the Knights.  Two results were by Smith Jr. The first was a long three-pointer.  The second was a spectacular drive and left-handed lay-up off the glass.

At this point in the game, the relentless driving to the bucket by Kennedy’s Elijah Thomas Jr. began to take its toll on PCTI.  Taking advantage of free throw opportunities, the junior’s efforts were complimented by the play of sophomore center Hargrove.  The latter combined a block and a steal, all in one, of a Bulldog shot attempt.

Yet, PCTI was still not finished as Wade sank a long trey from beyond the key. Soon thereafter, Kennedy’s tenacious defense forced a wild Tech air ball.  The Kennedy defense again, stepped up to the plate, resulting in the sneaking in of an easy, uncontested lay-up.  However, with 3:19 left on the clock the game was not over.  Kennedy hung onto a precarious 6-point lead, 54-48.

As tension in the Kennedy gym mounted, the two squads traded baskets. The Bulldogs’ full court press intercepted an inbounds pass but Harrison returned the favor with a pickpocket and coast to coast score.

With the expanded lead, Kennedy slowed down the pace and played keep away. The strategy worked as the Bulldogs were forced to foul.  JFK’s Colon repeatedly went to the free throw line and calmly sank nearly every opportunity.  The game concluded with incredible dribbling exhibitions by the Knights’ Harrison and the Bulldogs’ Johnson. The latter converted a layup but it was too little, too late, as the final buzzer sounded.

The Knights play Wayne Hills for the Passaic County title on Saturday, Feb. 24. The game promises to be a barn-burner as this season’s match between the two teams was won in overtime by Kennedy.