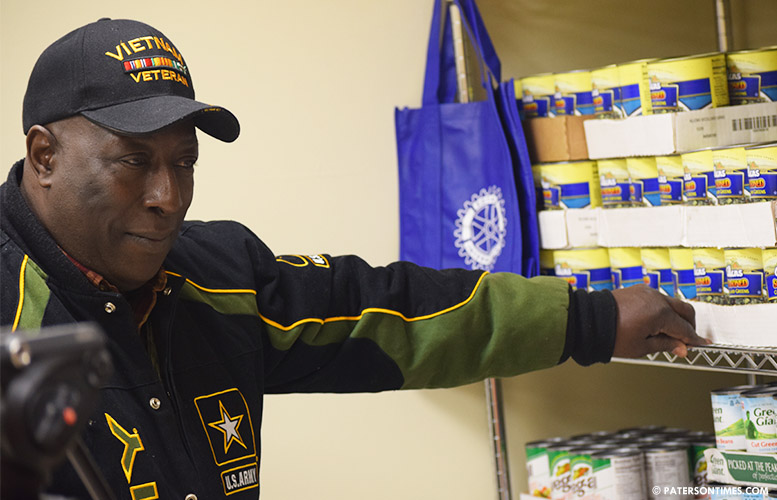 The more than 700 square feet room inside the Gordon Canfield Plaza Residence has shelves after shelves of canned food items for Passaic County veterans and military families. Officials opened the Great Falls Rotary Foundation Military Assistance Pantry during a ceremony on Monday morning.

James Williams, a veteran of the Vietnam War, welcomed the new food pantry that has the potential to serve thousands of veterans living in the 16 towns of Passaic County. There are 27,000 veterans, who call Passaic County home, according to congressman Bill Pascrell.

“This is what we need. There are a lot of veterans going through hard times,” said Williams, 68, (pictured). He said veterans have a hard time finding jobs and experience difficulties returning to a normal life after coming back from the battlefield. “We have to help our veterans in their time of need.”

The food pantry is the work of the Great Falls Rotary Foundation and the Passaic County Board of Realtors. The Paterson Housing Authority has donated the space to house the pantry in room 204 of the senior housing building.

“It’s hard when you have a veteran, who served the country, but now cannot put food on the table,” said Perry Lighty, a member of the Great Falls Rotary, which was established in 2009 and has 36 members.

Lighty said the pantry has 30 pellets worth of food. “We have a lot more supplies coming in,” he said.

The rotary and the board raised $30,000 over the past two years to make the pantry possible. It was the brainchild of John Walters of the Passaic County Board of Realtors. A real estate broker, Debra Flowers, who belongs to both organizations, brought the different parties together to make it happen.

“I can’t say how proud we are of you. I thank yous all,” said Walters to a small band of veterans at the ceremony. 200 invites were sent out to veterans, said Irma Gorham, director of the Paterson Housing Authority, but a handful attended the event.

“If we can’t do this for veterans, who the hack can we do it for?” remarked Pascrell, who also mentioned the Paterson Housing Authority’s commitment to provide housing to homeless veterans. “We have obligations and responsibilities. We’re not doing veterans any favors.”

Mayor Jane Williams-Warren thanked the groups for opening the pantry in Paterson. She knows firsthand what veterans face trying to return to civilian life. Her father served in World War II and her husband is a disabled veteran of the Vietnam War.

Williams-Warren’s brother is also a veteran, she said.

“It’s just that somebody has to care and that’s what we’re doing. We’re caring. To have this pantry open for the veterans and their families is a phenomenal feat for the city of Paterson,” said Williams-Warren. “The veterans are very dear to me.”

There are other groups that provide food assistance to veterans like the Eva’s Village, Father English, and CUMAC. However, these groups do not exclusively serve the military veterans and their families, said officials.

Veterans, who are proud people, sometimes have to be persuaded to accept assistance. “It’s just matter of support from each other. Let them know that it’s okay to be able to use the services that are here,” said Marcenia Cofield, 57, who served in the air force during the successful U.S. invasion of Grenada.

“We know they need help. This is the least we can do for our veterans,” said Pascrell.