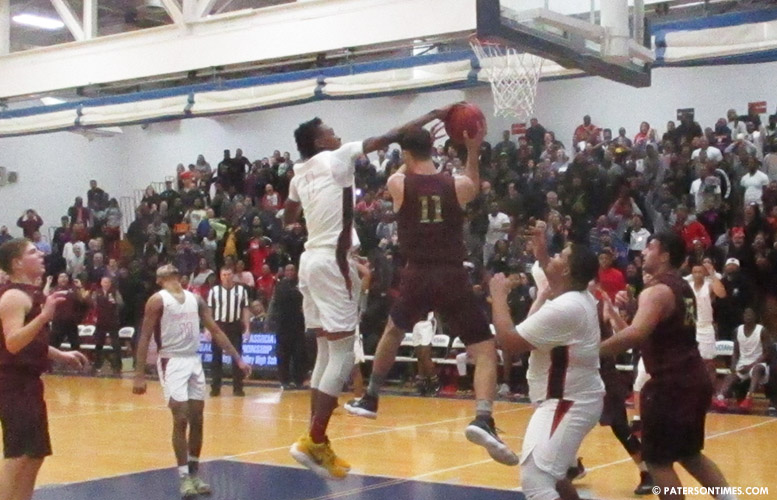 The low scoring, initial 5 minutes was highlighted by defense. Both the Patriots and the Knights exchanged fouls, turnovers, and missed shots. Wayne Hills was the first to turn up the scoring thermometer, courtesy of an offensive rebound and kick-out assist by senior center, Jason Modak. The pass went to fellow senior, forward Joe Cerone, for a 20-foot jumper near the key.  However, any rally the score may have sparked was quenched by two consecutive Patriot turnovers — an offensive foul and travelling violation.

Kennedy floor general, junior Joshual White, handled up-court dribbling duties and attempted to kick-start the Knights’ offense. After a flurry of subsequent passes, the Knights’ electrifying guard, senior Jaylen Colon, drove baseline and dished to Elijah Thomas for a successful banker off the glass. Also fouled in the act of shooting, the senior guard swished the free throw to complete a 3-point play.  To conclude the first frame, the Patriots notched a thrilling, buzzer beating shot to pad their lead to 13-8.

The second quarter was inaugurated with both squads garnering offensive rebounds but yielding no fruit. Wayne Hills’ senior guard Joey Belli then found Cerone at the low post for a successful banker off the glass. White responded with a bucket underneath for JFK. However, the Patriots’ ensuing inbounds pass and convoy beat the Knights’ defense and concluded with a long three-pointer, from the left wing, by Patriot senior guard Justin Wills.  Colon answered with a 3-point play for the Knights.

Nothing came easy for either team

Nothing came easy for either team for entire afternoon. Even bringing the ball up court was a showcase of offensive prowess versus defensive intensity.  This time, Wayne Hills’ Wills willed an escape of Kennedy’s Colon. However, the Patriots could not convert offensively despite several fancies, behind the back dribbles by junior Jake Belli (younger brother of Joey).  Following a walking call on Wayne Hills, Paterson’s Colon pin-balled through the lane and was fouled before he could attempt a shot. Kennedy sophomore Jah-mahi Carnegie’s inbound pass to Jamir Lattimore was forward to JFK sophomore center Jalen Hargrove, at the low post.

In jostling that would continue for the entire game, the Patriot’s Cerone was called for a pushing foul on Hargrove. Soon thereafter, Kennedy’s Colon attempted a 3-pointer from beyond the key.  Although the shot fell short, Colon was fouled. His three free throws hit nothing but net. With 5:14 left in the first half and junior sparkplug Gemir Robinson entering the contest, the Knights had pulled to within 5 points of the lead, 20-15.

It was then that Wayne Hills’ Belli (big brother, Joey) discovered something he may have suspected, but had yet to experience. The Patriots’ senior guard drove the lane, literally, into Kennedy’s center, Hargrove.  Belli’s questionable challenge against the immovable force resulted in a wild shot attempt that did not come close to the basket, let alone the backboard.

Kennedy then moved quickly up court. Wayne Hills was tagged for a blocking foul, much to the loud dismay of Patriot fans. Kennedy continued success from the charity stripe as White dropped in two offerings.  An up-and-down the court free-for-all was concluded by a furious scramble for the ball.  Another up-court dribbling duel ensued, this time with Patriot Jake Belli defending against JFK’s White. Shortly following, another skirmish occurred.  Only a referee’s whistle halted the confusion and tangle of bodies as Patriot coach Kevin Grimes called a time-out, narrowly avoiding a tie-up.

With Wayne Hills ahead 20-17 and 3:11 left in the first half, offensive patience prevailed. After multiple trips around the horn, including the passing up of several possible shots, sharpshooting forward, Patrick ‘Mr. Dependable’ Gilmore, connected on a 3-pointer.  The Wayne Hills senior’s calming presence, as well as passing, defense, and involving others in the offense, epitomized team play for the entire contest.

JFK’s Hargrove missed a baby-hook in the lane. The Knights followed up by clamping on a full court press. The ball was slapped out of a Wayne Hills’ player’s hands. Picked up on the run by Kennedy’s Jamir Lattimore, the senior guard was fouled in the act of shooting on his layup attempt. 1 of 2 free resultant free throws were successful.

Up by 2 points, 20-18, Wayne Hills tossed an errant pass. Kennedy’s White pulled down a defensive rebound and fired the outlet pass to Colon who stormed the length of the court for a scintillating, fast break score.

As the halftime clock wound down to scant seconds, the capacity crowd at Wayne Valley High School stood on their feet. Not affected by the deafening roar of the fans, Wayne Hills’ Belli (senior Joey) drove the lane through heavy traffic for a spectacular layup attempt.  However, the effort bounced off the rim.  A rebound and ¾ court desperation heave by Kennedy’s Hargrove fell well short. The halftime score was knotted at 20-20.

Wayne Hills first offensive thrust resulted in a travelling violation.  Modak and Hargrove then squared off at the low post.  Hargrove triumphed with a quick pivot and score.  After Paterson’s Colon was fouled driving the lane, Hills’ Wills suffered the same fate, while shooting, and tallied two free throws.

With 6:41 left in third quarter, Kennedy’s Gilbert stepped up to the plate.  Some basketball historians may remember the legendary Marvin Barnes who played collegiately for Morgan State University, in the 1970’s.  Known for his rebounding, scoring, and shot blocking ability, Barnes earned the nickname, The Human Eraser. In a stretch of several minutes, Gilbert, likewise, dominated the game on the boards, with successful scores, and leading fast breaks up the court.  Part of Gilbert’s spree was enabled via textbook assists from fellow senior, Colon.

Score continued to see-saw back and forth

Tension in the auditorium mounted as the score continued to see-saw back and forth.  Wayne Hills was bolstered by a successful banker from the top of the key by Wills.  Paterson’s Lattimore answered with an offensive rebound and put-back off the glass.

JFK’s Colon then pick-pocketed a Patriot pass and turned in a fast break lay-up, culminating in a 3-point play.  However, the Patriots’ Wills responded by rushing down court with the ball, only to pull up at the last second, for a 10-foot jumper in the paint that found its mark.

As the third quarter neared conclusion, the furious competition escalated with the Patriots’ Gilmore, again, in the thick of the action.  Colon scored with a runner near the lane.  Wayne Hills’ Modak and Paterson’s Gilbert then traded missing inside, easy layups.  However, the Knights’ senior, Zhimiar Cantey, alertly found Gilbert in the lane for another Paterson bucket.  The elder Belli was fouled while shooting and sank both free throws for Wayne Hills.  The pair of freebies resulted in the score tied at 33-33.

With 59 seconds left in the third quarter, the Knights chose to play keep away to possibly set up a last shot.  However, the strategy failed as JFK was called for an offensive foul.  With mere moments left, Wayne Hills cruised up court.  Big brother (Joey Belli) found kid brother (Jake Belli) all alone, well beyond the 3-point line on the left wing.  The shot from the stratosphere tickled the twine as Wayne Hills’ fans erupted for joy.

The fourth quarter opened with the Patriots’ Modak snatching a defensive rebound.  However, Paterson’s Gilbert, soon thereafter, converted a fast break layup.  Colon followed with a successful jumper from the free throw line.  For the Patriots, Joey Belli was fouled while attempting a 3-pointer but made only 1 of 3 free throw attempts.  Colon then circled from the key, to the left wing, and to the basket, for a nice scoring drive.  Joey Belli and Modak then connected with an assist and a two-point banker for Wayne Hills.

The Knights’ Colon then took his turn to temporarily dominate the game.  The Silk City phenom connected with yet another clutch shot, this one a 20-foot jumper from left of the key.  A pick-up of a loose ball and coast-to-coast score by Colon was sandwiched by teammate White’s spectacular rejection of a Patriot shot attempt from deep in the left corner.

The amazing team balance of Wayne Hills was not to be denied.  Despite being behind 45-39 with 3:29 left in the game, the Patriots clawed back.  Fans were fortunately granted needed relief as the heart-stopping action was temporarily halted down the stretch by strategic time outs called by both coaches.

As it looked like Kennedy might pull away, the Patriots scored 6 unanswered points.  Modak’s steal led to a 3-point rainbow by Wills.  Hill’s Joey Belli was then fouled and converted both free throws.  Another Patriots’ basket followed.

With 54 seconds left in the game and the score tied, 49-49, Kennedy opted to wait for a last second shot. Colon and Harrison exhibited dribbling wizardry as the clock wound down.  At the last second, Hargrove found himself with the ball at the low post.  The JFK center managed to get the shot off despite being swarmed by defenders.  As the entire crowd collectively held its breath, the shot curled tantalizingly off the rim.

Wayne Hills started the extra period with offensive patience.  However, after running nearly an entire minute off the clock without attempting a shot, a 15-foot effort went awry.  Yet, a 10-foot Kennedy banker did the same.  Hills’ Cerone then missed from inside but grabbed his own rebound and was fouled.  1 of 2 free subsequent free throws found its mark.  Kennedy’s Gilbert replied with a fast break bucket.  The Patriots’ Wills was then fouled and sank both, clutch free throws.  With 1:47 left in overtime, the Patriots clung to possession and a tenuous one-point lead, 52-51.

Cerone again found himself at the line for Wayne Hills.  The senior missed the first attempt but sank the second.   Behind by two points, 53-51, a driving shot through the lane by Kennedy fell short.  The defensive rebound went to Wayne Hills.  A sensational cherry-pick score followed as the Patriots were able to sneak behind the Knights’ defense.

Behind 55-51, with 9 seconds left, Kennedy’s final shot effort bounced off the backboard.  The buzzer sounded. Wayne Hills had escaped by the narrowest of margins for a hard fought, well-earned victory against the determined Knights.

After the game, Kennedy head coach Patterson said his team would not be discouraged.

“If that shot at the end of regulation had gone in, we would have won,” said Patterson. “Now we will focus on states. There have been a lot of teams that lost in the county tournament and went on to win a state championship.”