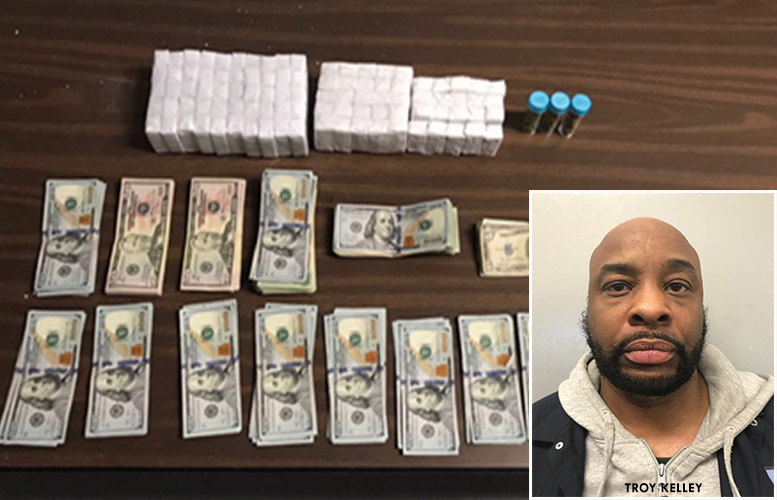 A man from Newark allegedly known for dealing drugs in Paterson was arrested on Tuesday afternoon, according to Passaic County Sheriff Richard Berdnik.

Troy Kelley, 51, is charged with nine drug offenses. Authorities recovered 4,759 glassine envelopes of heroin worth $15,000 and confiscated $15,527 in cash from him.

Detectives conducted simultaneous surveillance operations at 116 Chelsea Avenue in Newark and 102 Sherman Avenue in Paterson at around 3:35 p.m. Kelly was followed as he left his residence in Newark and traveled to Paterson.

Kelley parked his black Honda Accord on Crosby Avenue and Ryerson Street to allegedly conduct a hand-to-hand drug transaction with a man in a black Ford Focus in the area.

Kenneth R. Wood, 32, of Haledon, allegedly bought bags of heroin from Kelley. Wood was stopped in a motor vehicle stop and turned over 15 glassine envelopes. He was charged with a single count of drug possession.

Detectives conducted a second motor vehicle stop of Kelley. He had 9 glassine envelopes of heroin, 3 clear tubes of marijuana, and $920 in cash. Authorities conducted a search of Kelley’s residence at 116 Chelsea Avenue in Newark.

4,750 glassine envelopes of heroin were recovered in his bedroom. $15,000 in cash inside a clear plastic container wrapped in rubber bands were confiscated, authorities said.

Berdnik said Kelley sold illegal drugs throughout Paterson in his black Honda Accord.

Detectives continued their investigation into Kelley’s drug dealing activities following a January 24, 2018 arrest. He was arrested with 370 glassine envelopes of heroin in a motor vehicle stop on that day.

Kelly is being held at the Passaic County Jail.